My major claim in Chapter 2 of Talking About is that there is a characteristic way in which this phase of production can fail. So, just like we have malapropisms or tip-of-the-tongue phenomena at later stages of production, the normal formation of a referential intention can be thwarted by identity confusion. More surprisingly, perhaps, I claim that the mental state of identity confusion is the natural kind which many philosophers have so far failed to grasp except through the theatrical device of Fregean identity puzzles. I try to show that, roughly, the question why ‘a = a’ is trivial while ‘a = b’ can be informative, can only be understood against the background of a thinker who is confused about the identity of the object in question. 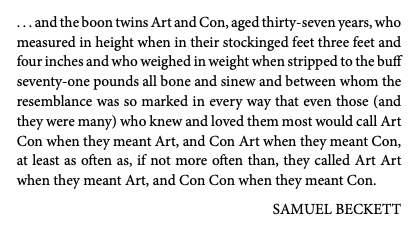 Yes, that is true, but the process of speech production very often fails to produce its characteristic effect in the normal way, without communication thereby failing in some catastrophic way. We mispronounce words all the time and it does not matter for the practical purposes of communication. We do not even notice things like this.
Confusion is the mental state of believing either of one object that it is two, or of two objects that they are one. So, I am confused about Superman and Clark if I believe that Superman is not identical to Clark. I am also confused about the identical twins Bill and Biff if I believe that Bill is not identical to Biff. Much of the book is devoted to an argument for the following claim about confusion: The mechanism of referential competence is constitutively disrupted when a speaker who is confused about some object tries to form a communicative intention to refer singularly to that object. How could this be so? It seems absolutely undeniable that I can, on occasion, talk about Bill even if I happen not to believe that he is identical to Biff.
I will make three points in the remainder of this post to try to make this basic idea more palatable. First, in terms of the overall goals and plans of the speaker, it is clear that there is an element of failure. In referring to Bill, I definitely intend to refer to Bill and I definitely do not intend to refer also to someone else, for example Biff. But if I believe that a is identical to b I will normally intend to refer to b whenever I refer to a. That is to say, my utterance will be intended to be true or false depending on the state of that particular object, no matter what name I utter. (There are certainly complications about so-called opaque contexts here, but leave that for now.) But it follows that my plan is inconsistent. To simplify greatly, my false belief about Bill and Biff makes it impossible for me to refer intentionally only to a single object when I try to refer to Bill.
The complications start when we theorize about the nature and mechanistic implementation of communicative intentions as they guide and control the production of communicative acts. But there is one part of the speech production process which has not been examined very much, namely the nature of intention-formation or ‘conceptualization’ as it is more usually called in this literature.
Link to the book.
The Superman and Clark case is similar. When I intend to refer to Superman I definitely do not intend to refer to Clark at the same time. But since they are in fact identical, what I say will be true or false depending on the state of a single individual who is identical to Clark. My referential intention is thwarted.
My second point is that, even if this does not necessarily give rise to serious or catastrophic communication breakdown, it does have some characteristic effects on the design and planning of utterances. The example I use in Chapter 2 is one where, in virtue of the confusion, I will be unable to navigate correctly between choosing between the second-person pronoun ‘you’ and the third person pronoun ‘he,’ when standing in front of the person about which I am confused. But I also spend some time showing how this would apply in a case where I am confused about Paderewski – in Kripke’s well known example – and stand in front of him. Spelling out the details would take too much time for a short blogpost, unfortunately.
My third and final point is that, despite a number of compelling arguments to the contrary, I think we should construe identity confusion at the level of belief. Some prominent philosophers have argued that, if I am really confused about, say, Bill and Biff, I cannot really form the belief that Bill and Biff are identical, because then I would have to have a concept of Bill as distinct from Biff! I spend quite a bit of ink or pixels in Chapter 2 to show that this is an overreaction. Basically, the confused belief can easily be a form of implicit attitude, postulated by theorists to explain the speaker’s cognition and behaviour. But this sets me up for Chapter 3, where I try to explain what kind of implicit attitude is involved here. This will also be the topic of my next post.