It’s unclear how these experiences actually impacted the moral dispositions of these astronauts, or for how long. Indirect evidence that suggests a lasting positive impact comes from research on how experiences of awe can result in increased prosocial behaviour, specifically by diminishing focus on the individual self and its concerns. Billionaires have the resources to effect massive positive change for others – presumably less focus on their own individual selves could be a good thing for the planet’s inhabitants. It’s also not clear whether Branson and Bezoz will have gone far enough from the planet to trigger the overview effect. While the International Space Station sits at around 400km away from the surface, Branson and Bezoz’s own flights barely reach a quarter of that distance, and so the ability to Earth gaze may be limited (though apparently Bezoz’s Blue Origin rocket have the largest windows ever flown into space).
Billionaire Richard Branson blasted off to the edge of space this month on his Virgin Galactic rocket plane, and Jeff Bezoz just followed suit in his own Blue Origin rocket ship – Elon Musk may well venture into space as well. The billionaire space race is certainly on, and while there are at least half a dozen ways to scoff at it, it’s interesting to wonder what the impact on billionaires’ moral outlook might be once they go to space and look back at the planet. Might they experience the overview effect? 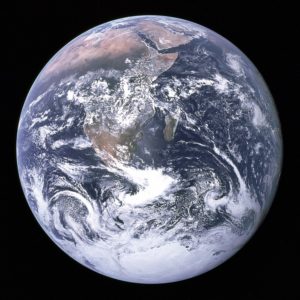 This refers to a profound shift in perception reported by astronauts seeing firsthand the Earth suspended in the void of space. Multiple accounts describe it as an overwhelming experience of awe, both at the fragility and unity of the planet. An intense sense of connectedness and of understanding the “big picture” appears common.

By Hazem Zohny.
Still, to the extent that space tourism seems an increasing likelihood in the near-term, it probably can’t hurt to look into this possibility of Earth gazing-induced moral enhancement. Perhaps one day jetting off into space to look back at the planet will be mandated for those with massive power.
Apollo 17, Public domain, via Wikimedia Commons
However, even if the overview effect did morally enhance the small sample of non-billionaire astronauts who have been up there, moguls might have a very different experience. For all we know, perhaps they will look back at the planet and feel intensely struck by how much more there is to own and control of the “brilliant jewel in the black velvet sky”.