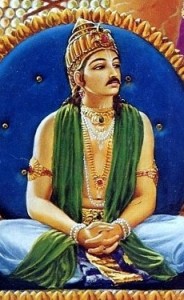 The following narration of Apara Ekadashi is found in the Brahmanda Purana. King Yudhisthira inquired from Lord Krishna about this most auspicious of Ekadashis. Yudhishthira Maharaj said, “O Janardana, what is the name of the Ekadashi that occurs during the dark fortnight (krishna paksha) of the month of Jyeshtha (May-June)? I wish to hear from You the glories of this sacred day of Hari. Please narrate them to me.”
Click here to know – “How to observe ekadasi as per Srila Prabhupada’s instructions?”
This year Apara Ekadashi falls on 06 June 2021.

“One who fasts on this holy day gains universal fame. Even such sins as killing a brahmana, a cow, or an embryo; blasphemy; or having sex with another’s wife are completely counteracted by observing Apara Ekadashi.” These are all extremely abominable acts in human society, but by fasting for Apara Ekadashi the reactions can be eliminated. When Apara Ekadashi is observed in the right spirit of devotion to Krishna, it burns away sinful reactions. That is the power of devotion to Krishna.
Apara Ekadashi is considered very powerful in eliminating sinful reactions. This article describes the benefits of following this Ekadashi as narrated by Lord Krishna to King Yudhishthira in the Brahmanda Purana.
Bathing three times daily in Pushkara-kshetra during Kartika (October-November); bathing at Prayag in the month of Magha (January-February) when the sun is in the zodiac of Capricorn; serving Lord Shiva at Varanasi (Benares) during Shivaratri; offering oblations to one’s forefathers at Gaya; bathing in the sacred Gautami River when Jupiter transits Leo (Simha); having darshan of Lord Shiva at Kedarnath; seeing Lord Badrinath when the Sun transits the
sign of Aquarius (Kumbha); bathing in Kurukshetra at the time of a solar eclipse and giving cows, elephants, and gold in charity. A person who observes Apara Ekadashi gains the merit of performing all these pious acts. One who fasts on this day also attains the merit of donating a pregnant cow, along with gold and fertile land.” Holy places and astrological calculations are very important in performing Vedic pious activities. The Lord enumerates many pious activities, which are still followed by millions in India. But, the devotional activity of observing Apara Ekadashi bestows all the benefits provided by these pious activities.
As any other Ekadashi, devotees can observe this Ekadashi by increasing devotional activities like chanting & reading Srila Prabhupada’s books. Since the pastime of Lord Vamana expanding into a gigantic form and covering the whole universe by His two steps happened on this day, devotees may read about it in Srimad-Bhagavatam. (SB 8.20). On this day, one should consciously practice avoiding criticizing others and lying. One should avoid eating all grains, pulses and beans. One may eat fruits, simple vegetable curry, milk, and non-grain foods. Apara Ekadashi can be a day of blissful spiritual austerity and by observing it strictly one can receive immense spiritual benefits.

Lord Krishna continued, “O king, those who bear false witness are most sinful. A person who falsely or sarcastically glorifies another; one who cheats in weighing on a scale; one who fails to observe the principles of his Varna or Ashrama; one who fabricates scriptures; a charlatan astrologer, a cheating accountant, or a false doctor- all these are surely destined for hellish punishments. But simply by observing Apara Ekadashi, all such sinners are freed of their sinful reactions.” Integrity is a very important aspect of human dealings. Lord Krishna emphasises this in this passage. Observing Apara Ekadashi transforms the consciousness of even the most sinful people to become Krishna’s devotees. Then their sinful reactions are dispelled. 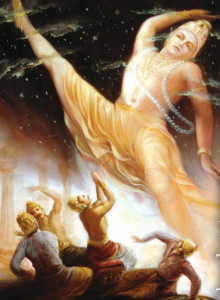 It is on Apara Ekadashi that Lord Trivikrama (Vamana) took away the whole universe from Bali
Maharaja with His gigantic steps.

Offerings to forefathers at Gaya, India
Lord Krishna continued, “Listen, to further glories of this amazing Ekadashi. The merit attained by observing Apara Ekadashi is equal to the merit of performing the following activities: 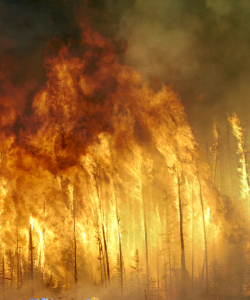 The Lord using evocative imagery said, “Apara Ekadashi is an axe that cuts down the forest full of trees of mature sinful deeds, it is a forest fire that burns away trees of sins, it is the glowing sun that removes the darkness of one’s misdeeds, and it is a lion that stalks the meek deer of impiety.” The Lord said in summary, “Therefore, O Yudhishthira, whoever truly fears his past and present sins must observe Apara Ekadashi very strictly.” The Lord mentioned the result of not observing this Ekadashi, “One who does not observe this fast must be born again in the material world, like a bubble among millions in a vast water body, or like a small ant among other species.” The Lord concluded, “Therefore one must faithfully observe the sacred Apara Ekadashi and worship the Supreme Personality of Godhead, Sri Trivikrama. One who does so is freed of all his sins and promoted to the abode of Lord Vishnu. O Bharata, I have thus described to you this the importance of the holy Apara Ekadashi for the benefit of all humanity. Anyone who hears or reads this description is certainly freed from all kinds of sins, oh best of saintly kings, Yudhishthira.”

Bathing at the Holy Lake of Pushkara
Lord Sri Krishna appreciating the query said, “O king, your question is wonderful because the answer will benefit the entire human society.” He then began to relate the glory of Apara Ekadashi, “This Ekadashi is so sublime and meritorious that even the greatest sins can be effaced by observing it. O great saintly king, the name of this unlimitedly commendable Ekadashi is Apara Ekadashi. 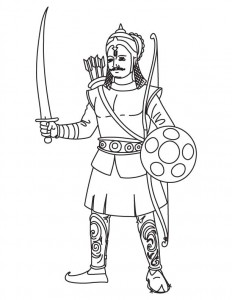 It is a Vedic principle for a kshatriya (person from the military class) to never run away from the battlefield (yuddhe capyapalayanam). Lord Krishna said, “Warriors who flee the battlefield are sent to a ferocious hell. But, O Yudhishthira, even such a fallen Kshatriya freed of that great sinful reaction goes to heaven if he fasts on Apara Ekadashi. A disciple who after receiving transcendental knowledge from the Guru, turns around and blasphemes him, is the greatest sinner. Such a so-called disciple is given unlimited suffering. But even such a rascal can attain the spiritual world by merely observing Apara Ekadashi.” The laws of nature governing warriors and students are very strict. Warriors have to be chivalrous and students extremely respectful towards their spiritual master. The power of observing Apara Ekadashi is the power of devotion that underlies its observance.