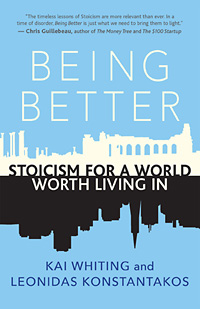 Moreover, it is this understanding of Stoicism that led us to tell the stories of the British spy Katherine Gun and the civil rights defender Claudette Colvin. For us, they were Stoic in everything but name. They chose to stand up against grave injustices, including US segregation and potential war crimes, because they were convinced that it was the right thing to do. And they stood up when it counted, even when they knew that their actions would almost certainly lead to their imprisonment and the unwarranted destruction of their reputation.
Leonidas Konstantakos is a co-author of Being Better: Stoicism for a World Worth Living in. He teaches in the international relations department at Florida International University.
The “problem” is that the stories of Zeno, Cleanthes, Sphaerus and Queen Agiatis can only be pulled together by going through fragments and texts like those authored by Plutarch and Diogenes Laertius. This is not only time-consuming but requires a level of scholarship (and interest) that most people who flirt with Stoic ideas on social media or even for their self-help best-sellers don’t have and are not interested in acquiring. It is also not a stretch to say that in some quarters (e.g., the “Broics,” an apt portmanteau to describe a particularly toxic interpretation of Stoicism that holds that only men can be virtuous) there is a conflict of interest that prevents making certain Stoic stories and ideas known. For evidence of this, look no further than Zeno the founder of the Stoa (the Stoic school).

Were There Really No Powerful Women in Ancient Stoicism?

Stoicism isn’t about excluding others from our concern or care. If it were, Zeno’s magnum opuswould not have been his utopian version of the Republic, which as the name suggests describes the ideal Stoic society, as opposed to the ideal Stoic individual! Zeno’s Republic isn’t based on wealth accumulation. There is no private property, there is no currency. There is no need to take more than strictly necessary. Zeno makes it clear that the ideal Stoic society is one built on the understanding that we are all connected to each other, because of our capacity for reason and our prosocial nature. It leads us to recognize that:
Stoicism seems to be the philosophical hobby horse of Silicon Valley and a whole host of life-hackers who otherwise wouldn’t be caught dead in the philosophy section of a book shop. University professor and Stoic author Nancy Sherman goes even further when she states that contemporary forms of Stoicism have become an industry. And a mega-industry at that. If Stoicism is an industry, it is one that is predominantly powered by white men, which may go some way into explaining why it’s become a mega one. It’s also one that has been sabotaged with many superficial readings of Stoic concepts. This is because it’s far easier for people (on all sides of the political spectrum and walks of life) to use Stoic ideas to further their career, social status, or performance in the gym rather than to grapple with Stoicism’s cosmopolitan vision and virtue ethics.
What the ancient Stoics meant when they said that “wealth is neither good nor bad” is that it makes no moral difference to one’s character, and thus their ability to flourish. Neither the rich or poor are immune to vice (cowardice, greed, injustice, and ignorance) and neither are excluded from virtue (courage, justice, temperance, and wisdom). In other words, it isn’t wealth, or lack thereof, that makes the moral difference but how you use it or manage without it. Consequently, it is only virtue or vice that can ultimately lead a person to experience the Greek concept of eudaimonia, which can be translated as “flourishing” or the “good life.” As Arius Didymus in his Epitome of Stoic Ethics (5d) states:

Agiatis, the Spartan Queen, is another powerful female who plays a significant role in Stoicism’s history. Yet, she is barely mentioned in Stoic circles, despite her role in standing up and succeeding against an oligarchical regime that murdered her first husband, Agis IV, and her in-laws (Agis IV’s grandmother Archidamia, and mother, Agesistrata) and added to their wealth and property by impoverishing and disenfranchising her people. It is rather telling that life-hackers who show such an appetite for Stoicism do not go further than highlighting how a “Spartan” flavored Stoicism can help them lift heavier weights in the gym or become more resilient in the rat race. What can be more Spartan or Stoic than taking the fight to the powerful and passing socioeconomic and land reforms in the name of justice at great personal cost? We told Agiatis’ story in our book precisely because it is the quintessential hero’s journey that also happens to contradict the idea that Stoicism is fundamentally about being less concerned with what other people say and do. Stoicism is about becoming less concerned with life’s trivialities, so you have the mental space to work towards the common good. The Spartans fundamentally understood this caveat, as we explained in Being Better (p11-12):

Can we Really Say that Stoicism is the Philosophy of the Rich?

In our opinion, the misunderstanding of the uniquely Stoic conception of the term “indifferent” has become increasing prevalent because of the proliferation of contemporary Stoic-influenced books, not to mention blog posts, that dedicate a great time and space to Epictetus’ words but fail to root them in virtue ethics, or even mention the word “virtue” at all. The term “indifferent,” when virtue is cast aside takes on an entirely different connotation, especially when Stoicism is promoted as merely a form of self-help. Unfortunately, too many in the Stoic community have become obsessed with the modern concept of the “dichotomy of control”, which is sometimes called the “sphere of agency” (e.g., by Classics professor Margaret Graver). Such a lens pans away from virtue and instead focuses on mere inner tranquility, created by the not becoming perturbed by other people’s thoughts, actions, and problems. In this respect, “indifferents” get wrongfully defined as things not worth being concerned or bothered about!

Spartan warriors were praised if they continued to fight after having lost a helmet, as it offered them only personal protection, but they were admonished if they discarded their shield, since this endangered their fellow soldiers, whose survival depended on tight interlocking shield formations. This nuanced understanding of the Spartan code of conduct is a far cry from the egotistical and macho Sparta of pop culture or indeed from the type of Stoic philosophy that gets promoted by “experts” on social media, life-hacking blogs, and in mainstream newspapers. While not all bad, many articles that promote Stoicism today are written by people who mistake business acumen for virtue.

However, the fact that most modern-day popularizers and academics linked to Stoicism happen to be white, male, and on the wealthier side says much more about contemporary society than it does the ancient Stoics. Sure, you can point to pompous Roman statesman Seneca the Younger and the powerful emperor Marcus Aurelius as the two most famous Stoics of the ancient world to refute our claim. But then equally, you would have to turn a blind eye to the physically disabled slave Epictetus, the dark-skinned, penniless immigrant Zeno of Citium, and the (probably) brain-damaged, knuckle-busted Cleanthes of Assos. Such individuals are hardly what one imagines the archetypal philosophers (ancient or modern) to be like. To make the ‘male’ argument work, you would also have to ignore the Spartan Queen Agiatis, who, with the help of the Stoic philosopher Sphaerus, leaned on Stoicism and her femininity to spark a revolution against the Spartan oligarchy and restore her city and her people to some of their former glory. You would have to ignore Stoic philosopher Musonius Rufus’ claim that both men and women are equally capable of virtue and should be taught the same life lessons. Sure, these people certainly aren’t the Stoics that the male-dominated Silicon Valley raves about, but they are equally significant Stoic (or Stoic-influenced) voices!

Silicon Valley Stoics hold up a very carefully curated image of Stoicism as the philosophy that emphasizes the Stoic teaching that wealth is an “indifferent” and that your wealth (and by extension other people’s poverty) is beyond your control. While it is perfectly true that wealth is what Stoics referred to as an “indifferent”, this perspective is born out of a superficial, and a frankly woeful, understanding of Stoic philosophy that doesn’t go beyond Stoicism 101 – literally Epictetus’ Discourses 1.1:

While it is undeniably important to remind people interested in Stoic philosophy to consider what is “up to them” and what is “not up to them” and act accordingly, it is problematic if contemporary scholars of Stoicism don’t then correct both the critics’ and fans’ assumptions that Stoics should shy away from and openly reject social action in favor of more individualistic pursuits, or that they should take no action at all (see Dr Donna Zuckerberg’s nuanced Not All Dead White Men for further details). Ironically, this attitude smacks of Epicureanism, a rival philosophical school, that held that the best life is achieved via the balanced seeking of pleasure with the absence of physical or emotional pain and suffering. If one follows an Epicurean path, everything else, including acting virtuously (i.e., justly, courageously, temperately, and wisely), is done to obtain what they considered to be the optimal state of freedom from anything that might perturb them, including other people’s problems!
All good things are beneficial and well used and advantageous and profitable and virtuous and fitting and honorable; there is an affinity to them. Conversely, all bad things are harmful and ill-used and disadvantageous and unprofitable and base and unfitting and shameful, and there is no affinity to them.
Zeno’s Stoic journey starts with what most of us would consider a catastrophic business failure following a shipwreck. Destitute, he sits at the port of Athens searching for answers. Who ultimately gives them to him? It’s not a powerful rich man. It’s the Oracle of Delphi, the priestess of the Greek god Apollo who, as we remind people in our book Being Better: Stoicism a World Worth Living in, was a powerful woman “respected and revered all over Greece for her divinations. Even kings would travel for days to seek her counsel.”

Not many contemporary Stoicism popularizers will mention the significance of the Oracle for Stoic philosophy, possibly because her existence doesn’t gel well with their modern sensibilities. There may be good reasons for this, especially given that divination is a highly superstitious practice, and her trance-like state raises issues linked to what exactly constitutes consent. However, this doesn’t change the fact that in ancient Greece, the Oracle’s cryptic words were not only sought out by the wise but had the power to start wars and end them. More importantly in the context of this article, removing the Oracle from Stoicism’s origin story is to deny or ignore the importance of a powerful woman’s voice in establishing Stoicism’s cosmopolitan vision built on a bedrock of virtues, glued together by mindful discipline. Carving her out of the story may help us to make more sense of Stoicism through modern eyes but it is as intellectually dishonest as it is unfortunate, precisely because it gives us the false impression that women had no input into the philosophy. Without the Oracle, without her, would there have ever been a Stoicism in the first place? 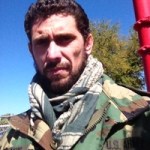 Evil consists in injustice and cruelty and indifference to a neighbor’s trouble, while virtue is brotherly love and goodness and justice and beneficence and concern for the welfare of one’s neighbor.
Some things are within our power, while others are not. Within our power are opinion, motivation, desire, aversion, and, in a word, whatever is of our own doing; not within our power are our body, our property, reputation, office, and, in a word, whatever is not of our own doing.