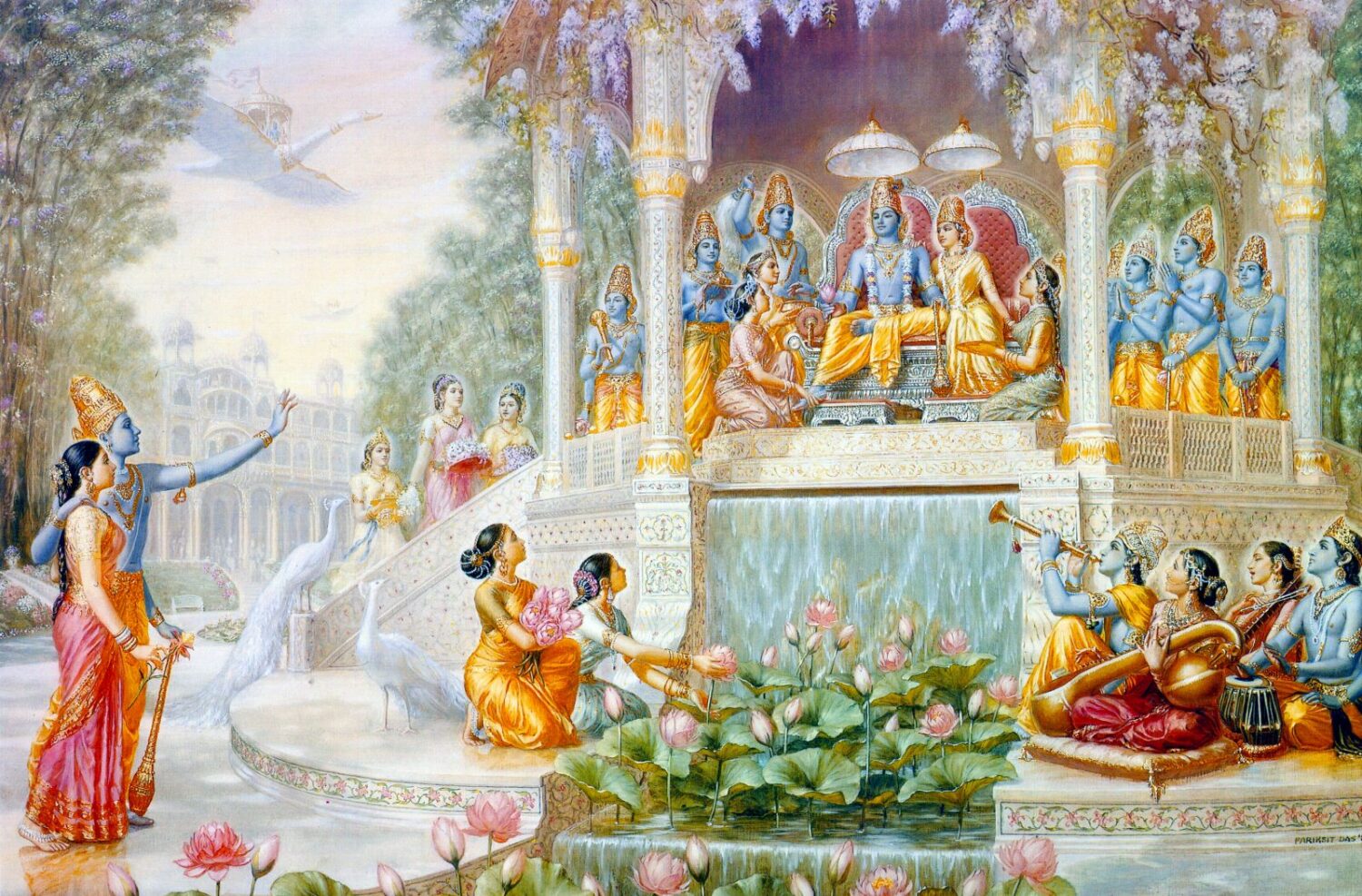 A Narration from Scriptural References
Lord Krishna described the glory of Varuthini Ekadashi in terms of charity, “Better than giving horses in charity is giving elephants, and better than giving elephants is giving land.Better still is the giving sesame seeds for fire-sacrifice, and better than that is giving gold.Still better is offering food grains to forefathers, demigods, and humans.Offering of food grains has been considered the greatest charity.Yet learned scholars have declared that giving away a young maiden in marriage to a worthy person is equal to giving away food grains in charity.Giving cows in charity is equal to giving food grains.Better than all these charities is the charity of giving spiritual knowledge to the ignorant.But, by fasting on the day of Varuthini Ekadashi one attains the great merits obtained by performing all these charitable acts.”
The story of Varuthini Ekadashi is related in the Bhavishya Purana.
Lord Sri Krishna said to King Yudhishthira, “Whoever observes Varuthini Ekadashi in this way becomes free from all sinful reactions and returns to the eternal, spiritual abode. One who worships Lord Janardana (Krishna) on this Ekadasi by staying awake throughout the entire night also becomes free from all his previous sins and attains to the spiritual abode. Therefore, O king, he who fears his accumulated sins, their attendant reactions, and death itself, must observe Varuthini Ekadasi  by fasting very strictly.”
In addition to these on the day of Varuthini Ekadashi  itself one should completely avoid the following:
Lord Krishna explained further glories of Varuthini Ekadashi, “Whatever merit one obtains by performing austerities and penances for ten thousand years is achieved by a person who observes Varuthini Ekadashi . The merit one achieves by donating a great amount of gold during a solar eclipse at Kurukshetra is gained by one who observes this one Ekadasi with love and devotion, and certainly attains his goals in this life and the next.”
There are some unique observances recommend by Lord Krishna in the Bhavishya Purana for Varuthini Ekadashi,
Sri Krishna replied, “O King, Varuthini Ekadashi is most auspicious. It eradicates the sins of those who observe a complete fast on this sacred day. Such persons obtain continuous happiness, and achieve all good fortune.Especially, fasting on this daybrings good fortune to unfortunate women. It bestows material enjoyment in this life and liberation at death.“
On the Dwadasi(the twelfth phase of the Moon), the day after Ekadashi, one should avoid the following: 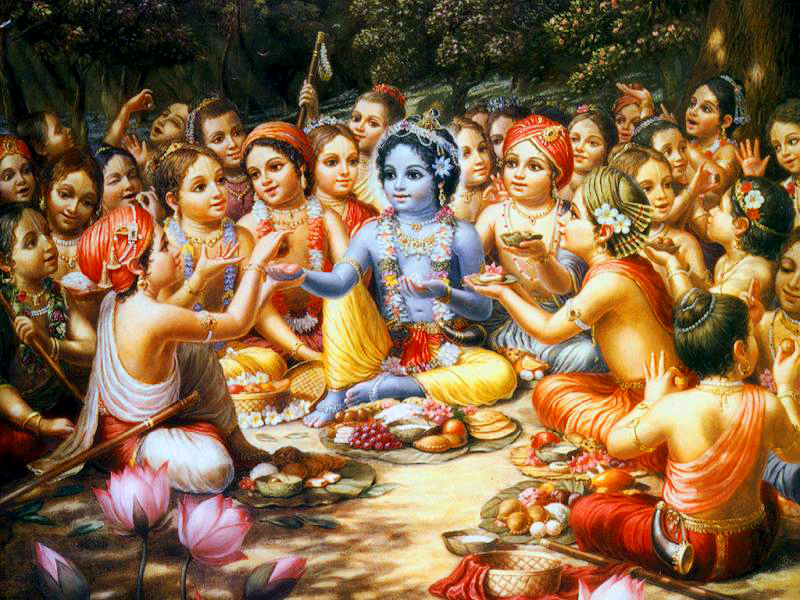 Excerpt From: A.C. Bhaktivedanta Swami Prabhupada. “Bhagavad-gita As It Is – Macmillan 1972 Edition” 18.5 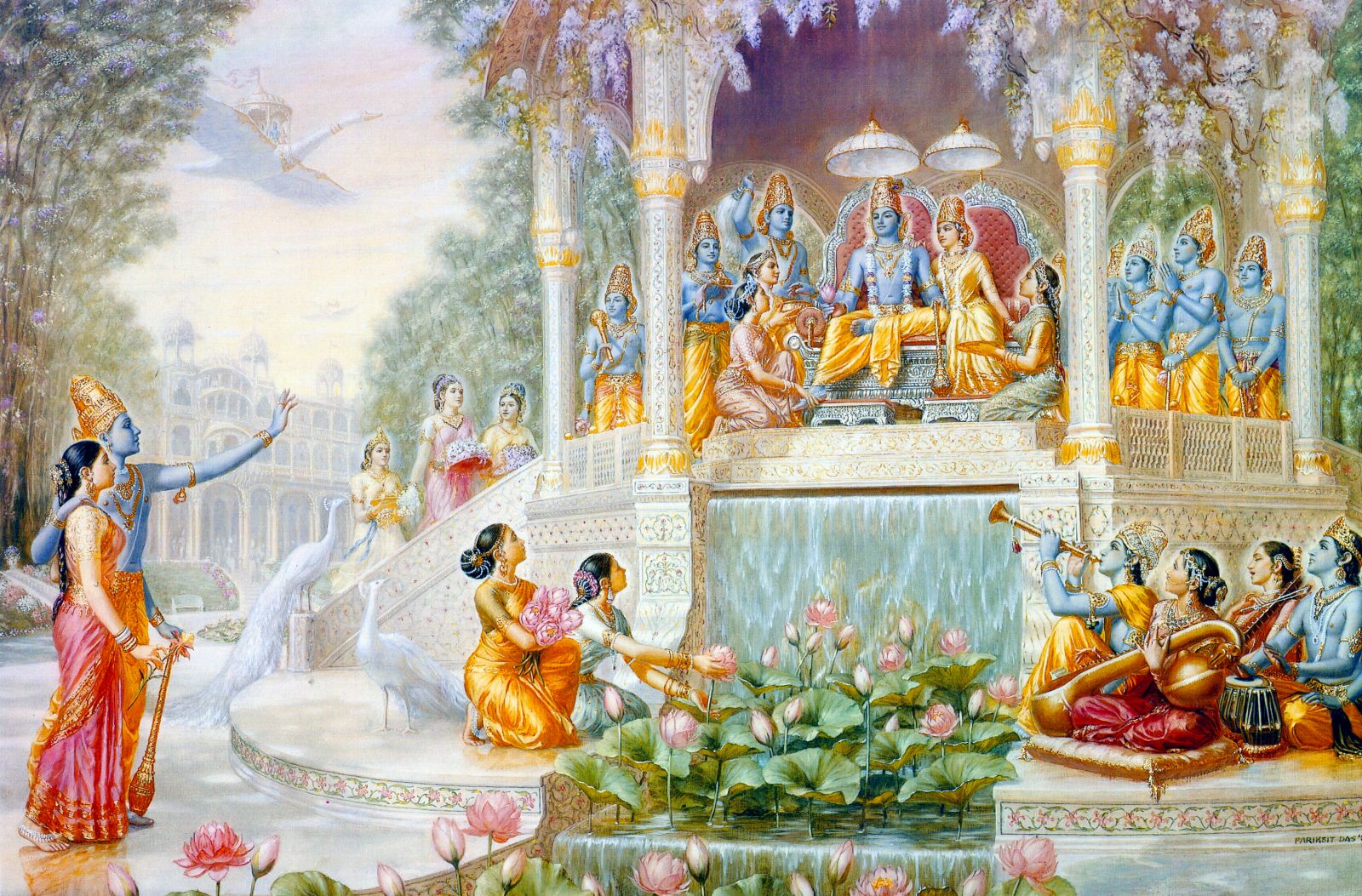 The following things should be avoided on the Dashami, (the tenth phase of the Moon), the day prior to Ekadashi:
Lord Krishna then described the benefits of Varuthini Ekadashi in terms of Karmic consequences. He said, “One who lives off the wealth of his daughters suffers a hellish condition until the inundation of the entire universe, Oh Bharata, one should be especially careful not to use the wealth of his daughter. O best of kings, any householder who takes his daughter’s wealth out of greed, who tries to sell his daughter, or who takes money from the man to whom he has given his daughter in marriage such a householder becomes a lowly cat in his next life. Therefore it is said that whoever, as a sacred act of charity, gives away in marriage a maiden decorated with various ornaments, and who also gives a dowry with her, obtains merit that cannot be described even by Chitragupta, the chief secretary of Yamaraja in the heavenly planets. That very same merit, however, can be easily achieved by one who fasts on the Varuthini Ekadashi .”
Scripture recommend charity (dana) as a purifying duty. In the Bhagavad-Gita it is stated,

Ekadashi is a powerful opportunity for us, the souls trapped in material existence, to perform recommended austerities and make our way back to our original home in the spiritual sky. The spiritual atmosphere is infused with selfless devotional feelings of the pure souls for Lord Krishna and His devotees. Enlightened humans should make best use of the opportunity to invigorate in themselves, this pure Vaikuntha consciousness transcendental to the debilitating impurities of the material atmosphere.

Click here to know – “How to observe ekadasi as per Srila Prabhupada’s instructions?”

Lord Krishna sited some historical references, “By observing this Ekadashi diligently, King Mandhata was liberated.Many other kings such as Maharaja Dhundhumara, in the Ikshvaku dynasty, who became free from leprosy resulting from the curse of Lord Shiva, also benefited from observing it.”
“Acts of sacrifice, charity and penance are not to be given up but should be performed. Indeed, sacrifice, charity and penance purify even the great souls.”
Lord Krishna concluded, “Finally, O noble Yudhisthira, he who hears or reads this glorification of the sacred Varuthini Ekadashi obtains the merit earned by donating one thousand cows in charity, and at last he returns home, to the supreme abode of Lord Vishnu in the Vaikunthas.”
King Yudhisthira inquired from Lord Krishna, “O Vasudeva! I offer my humble obeisances unto You. Kindly describe to me the merits and influence of the Ekadashi that falls on the dark fortnight (krishnapaksha) of the month of Vaisakha (April-May).”
Varuthini Ekadashi falls in the dark fortnight (Krishna paksha) of the month of Vaisakha. This year it falls on Sunday, 19th of April 2020.