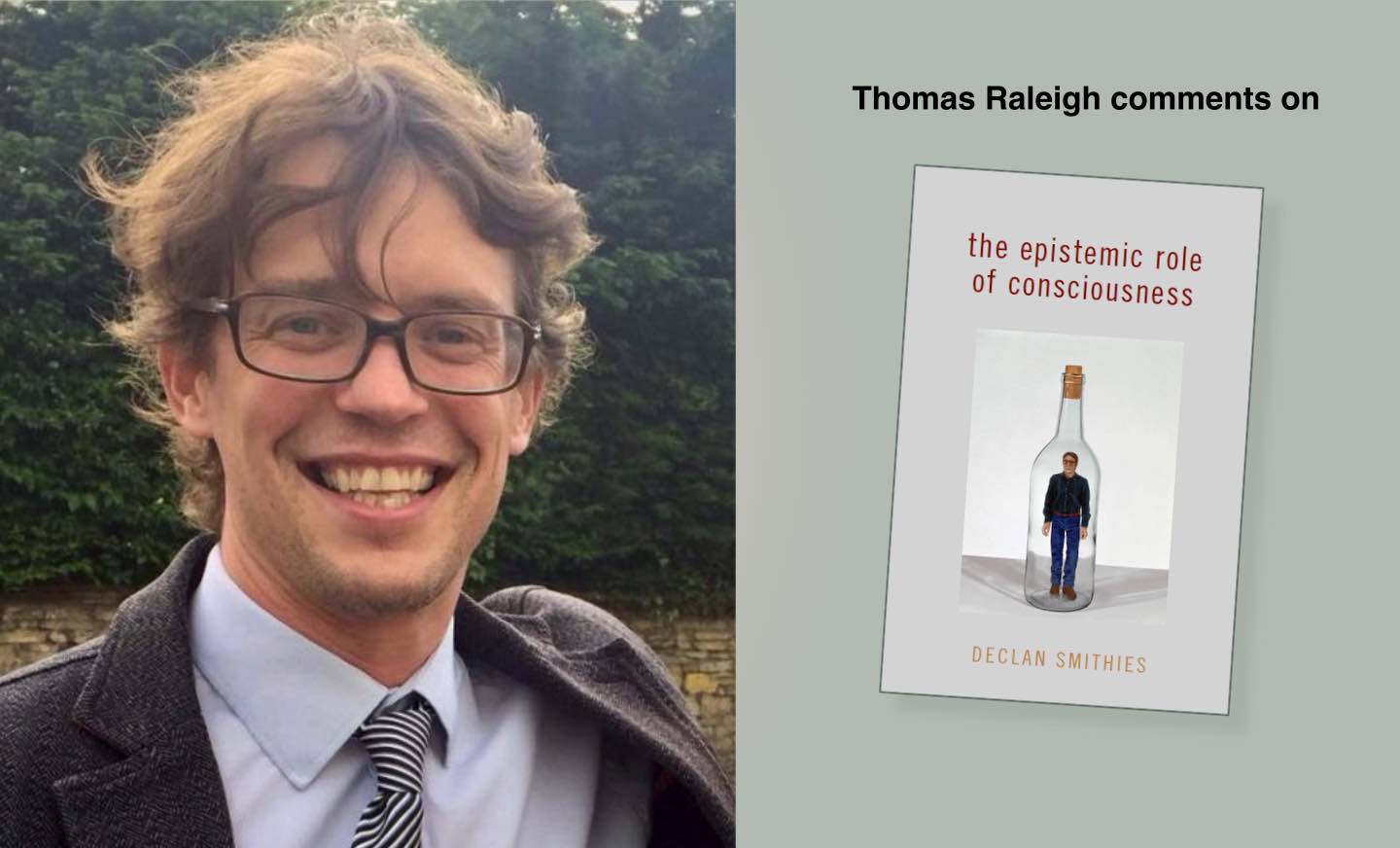 Declan discusses Schaffer’s case of the debasing demon. I wonder if evidence, no matter how strong, that one is currently a victim of the debasing demon could rationally permit forming a belief that one is currently a victim of the debasing demon?
Declan suggests that two internal-duplicate subjects (Fido and Fifi) have the same propositional justification to believe all the same object-dependent/de re propositions, but they cannot both form doxastically justified beliefs in all the same object-dependent/de re propositions if they are not perceptually related to the same specific objects. I consider a case where Fido and Fifi are perceptually related to exactly the same objects, and the scene looks exactly the same way, but where the objects are in fact arranged differently. I wonder if this is a case where their doxastically justified beliefs would come apart despite being intrinsic duplicates?
Declan emphasizes that Moorean propositions such as [MOORE]: p & I don’t believe that p, are ‘finkish’ – the very act of forming a belief in such a proposition changes your evidence and also changes the truth-value of the proposition. Declan suggests that one can have propositional justification to believe MOORE, it is just that one can never convert this to Knowledge due to the Fink-ish-ness of the situation. Whilst I agree that the situation is Fink-ish, I wonder whether one can really have propositional justification to believe MOORE even before any belief in it is formed, since one is already in a position to know that IF such a belief is formed it is guaranteed to be false?
Thomas Raleigh (University of Luxembourg)
Welcome to the Brains Blog’s Book Symposium series on Declan Smithies’ The Epistemic Role of Consciousness. In this series, seven critics discuss the book with the author. The critics are Kengo Miyazono, Lu Teng, Takuya Niikawa & Yasushi Ogusa, Brie Gertler, Thomas Raleigh, and Tony Cheng. From April 26 to May 1, we post each critic’s commentary and the recorded discussion one by one on the blog.

In this fifth post, Thomas Raleigh discusses three key issues in Declan’s book, zombies, propositional and doxastic justification, and Moorean propositions. Here is the link to the recorded discussion, in which Declan responds to Thomas’ comments.

A(iii) Zombies Who Are Disposed Not To Be:

Declan wants to assimilate cases where a subject believes that p but is agnostic (suspends judgement) whether this belief is justified with more obviously Moorean conjunctions such as: Bp & B(I’m not JBp). I present a case where the former combination of attitudes seems pretty reasonable in light of evidence about one’s own unreliability in forming beliefs about one’s own beliefs. I wonder what Declan makes of this sort of case?

Declan says that we should accept the existence of non-conscious mental representation since this is part of our best current scientific theories. But I wonder if this same motivation would also support ascribing rationality and/or justification to zombies?

If zombies are epistemically possible, then presumably it is also epistemically possible for there to be a subject who is disposed to have phenomenal properties in some circumstances but who is otherwise a zombie. Such a disposition might never be actualised – the circumstances never in fact obtain – in which case the subject is a life-long zombie. But so then I wonder if according to Declan’s own view such a zombie should count as having genuine beliefs (as opposed to mere z-liefs)?

According to Declan, an ideally rational agent would never fail to convert propositional justification into a doxastically justified belief, supposing she forms an opinion on the matter at all. I wonder whether limitations on attention – e.g. if a phenomenal conscious state is too complex and changeable for us to be able to attentionally track all the details – are really failures of rationality or whether they are more like perceptual limitations?

Declan holds that what an ideally rational agent ought to do in response to misleading Higher-Order evidence differs from what us non-ideal agents should do. But he also accepts that whether one is an ideal agent or not is not something that is phenomenally luminous (introspectable) to the agent. I wonder what he would say about cases in which an agent switches from being ideal to non-ideal (and back) with no phenomenally detectable sign of this change?

My comments can be downloaded in full here – but below is a brief summary of the nine questions I raise:

If me and my zombie are causal-functional duplicates how can the presence of phenomenal properties in my mental life be playing any causal-explanatory role in the formation of my phenomenal beliefs? I wonder what Declan’s response to this Shoemakerian worry is?