Although “virtue of practical judgment”™ is a technical term in the book, the corresponding vices are easily recognizable. The person who needs very specific and strict policies manifests the vice of inflexibility; these are the people who cannot carpe the diem of a beautiful sunny day in March because their self-imposed work schedule does not allow for this kind of exception. But even more popular is a vice that corresponds to a more general inability to take the means to our indeterminate ends. Even very specific intermediate policies need practical judgment to be carried out successfully. My quite strict policy of working on my book from 9-7 (allowing only a couple of breaks), still leaves room for a lot of screwing up. My attempt to implement this policy might look like this (and note that making the policy stricter would not necessarily solve the problem here):

[2] Of course, they are not virtuous actions. It is important to note in our discussion below that I am not committed to the view that an action that manifests only instrumental virtues is a virtuous action. 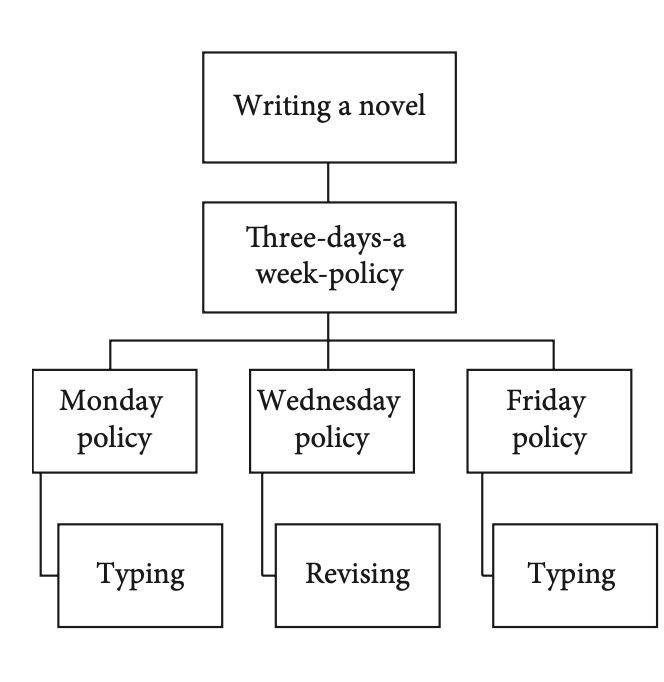 Shifter reacts to the news of the rabbit quite differently. Once she hears the tails about the bunny, and the fate of those who dared to face it, she tells herself “well, who needs this trinket?”, abandons her end of retrieving the holy grail, and heads back home. Sticker violates the principle of instrumental reasoning: he is obviously still pursuing the end of fetching the Holy Grail, while not taking the necessary means to his end. But the same is not true of Shifter. For her, the failure to pursue the means to retrieving the Holy Grail and the abandonment of the end were concomitant. Thus she is always in compliance with the principle of instrumental reasoning; after all, reason does not tell us never to abandon our ends. In fact, Shifter might do this consistently: conscious of her cowardice, she always abandons an end as soon as she realizes that she’ll need to face some danger in order to realize this end. So her cowardice never leads her to violate the principle of instrumental reasoning. Let us start by examining the virtue of courage. According to an Aristotelian conception of courage, this virtue can be manifested only in the pursuit of good ends; on this view, the daring burglar does not manifest courage. On a Kantian conception, the actions of the burglar do manifest courage.[2] I find the Kantian conception more intuitive, but I will not argue for it here; I will just assume this understanding of courage. On the Kantian conception, being courageous seems to be an aspect of being instrumentally rational; a coward seems to often fall short of pursuing the means to their ends. So perhaps this is the problem of cowardice: if you are a coward, you will routinely fail to comply with the principle of instrumental reasoning. However, this is not quite true. Let us tell a story with two cowardly heroes: Sticker and Shifter. Our heroes learned of the location of the Holy Grail and set off to bring it to their country. At some point in their quest, they found out about the scary rabbit in their path that threatens to devour anyone who continues towards the Holy Grail. Both Shifter and Sticker are cowards, but their cowardice is manifested in different ways.
Human beings tend to fall short of the ideal of perfect practical judgment. In particular, we often need to engage in what I call “intermediate policies” or intermediate actions. [3] So if I am writing a novel, I might need to rely on a more specific policy, for instance, a work schedule in which I commit myself to write at least 2000 words per week, and to read an average of 100 pages per day. The intermediate policies can be more or less specific (2000 words per week or 300 words per day), and they can be more or less vague or precise (“I will read roughly the equivalent of two books worth of writing tips every few days” or “I will read 120,000 characters per day”). The more specific and stricter my policies are, the easier it is for me to ensure that I will not mismanage the pursuit of my ends. On the other hand, the policies that are less specific and more vague allow for more flexibility. If my writing policy involves never leaving home on Wednesdays between 9-7, I will lock myself out of pursuing ends that would require my being away during these times.  Here is a little diagram illustrating the more and less flexible writing policies. At the top, we have the end of writing a novel, and at the bottom the actions that I perform as means of writing the novel. In between the two, we have the more or less specific policies I adopt in order to pursue this end: 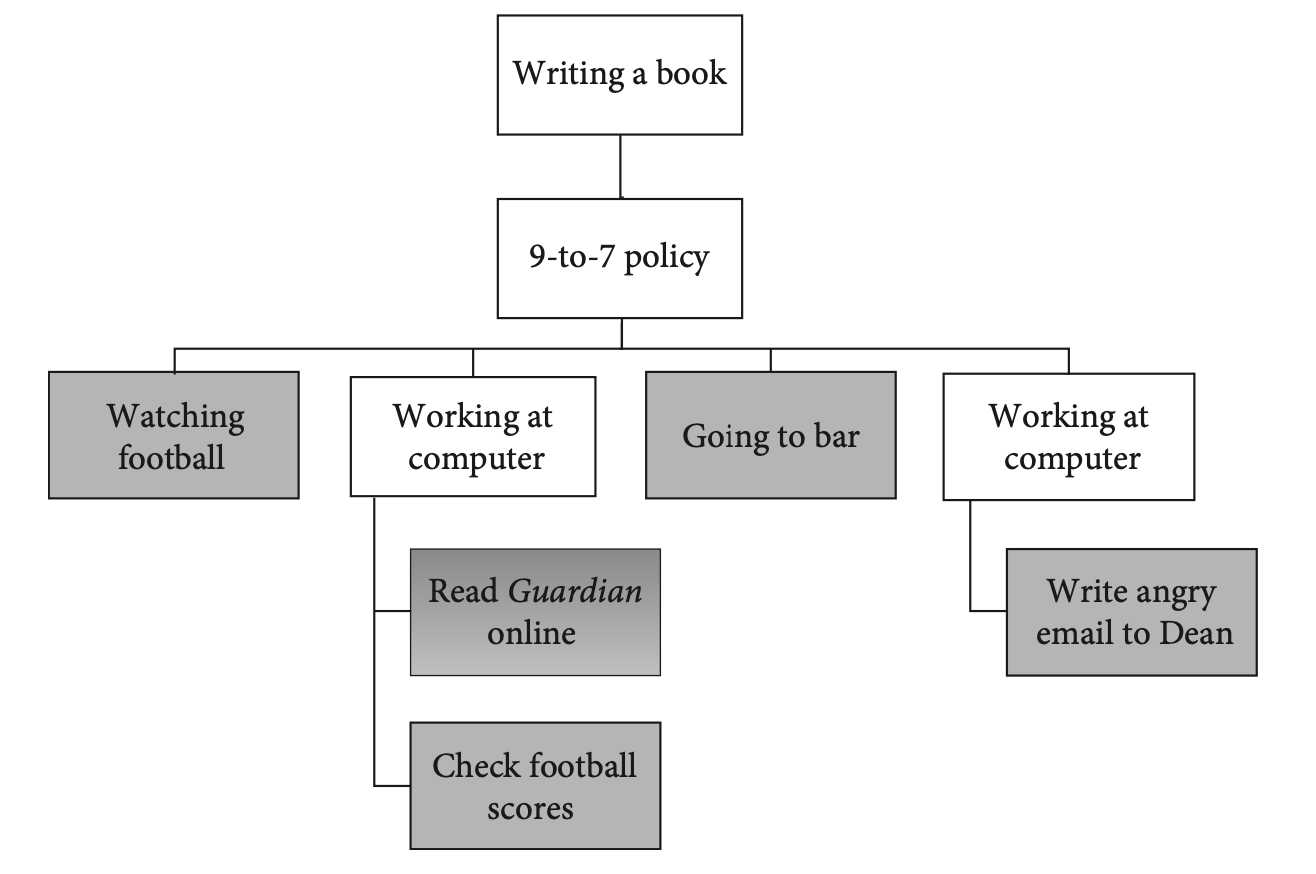 Yet, Shifter still falls short of ideal rationality. Why? In a nutshell, our capacity for instrumental rationality is a capacity to pursue our ends efficiently, whichever ends we happen to have. Cowardice is a limitation of this general capacity. Of course, our capacity to pursue ends has many limits. If a putative end requires that I travel faster than the speed of light, it will be beyond my reach. But cowardice is a limitation internal to my will. Shifter could just face the rabbit; it is within the general powers of her will. But because she is a coward, she expects she won’t. Roughly, instrumental vices are internal limitations to our rational powers to pursue whatever ends we set for ourselves; the instrumental virtues are their contrary.
[3] One of the claims of the book is that, for the purposes of a theory of instrumental rationality, policies are just instances of extended action.

A theory of instrumental rationality should not only put forward the correct principles of instrumental rationality but also allow us to describe and explain the nature of the core instrumental virtues. The Extended Theory of Rationality, I argue, gives us a compelling picture of these principles and their relation to the instrumental virtues. In the next installment, … Wait, this is the last installment. To learn more, you just need to buy the book.
Sticker sees the frightening rabbit but hangs on to his end of retrieving the Holy Grail. But, out of fear, he never actually advances any further towards the Holy Grail. Sticker just spends the rest of his life taking a few steps towards the bunny, losing his nerve, and going back to his hiding place. 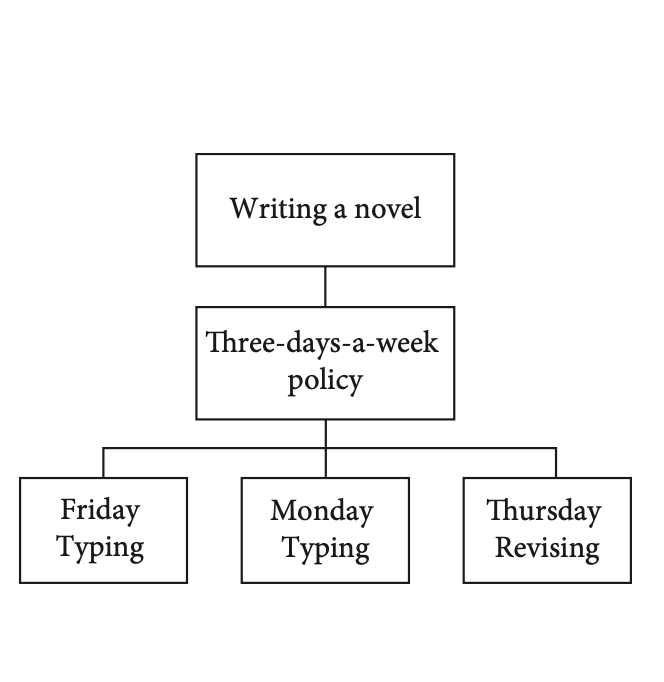 [1] Or at least this is my vague memory of it.
Of course, the Extended Theory of Rationality (ETR) is not the only theory of rationality that can accommodate the existence of instrumental virtues that are not reducible to compliance with principles of rationality. But ETR brings to light a particularly important instrumental virtue: what I call the virtue of “practical judgment”.  Let us say I am writing a novel. I need to ensure that in the course of the time I give myself to write the novel, I will engage in enough actions that will jointly constitute sufficient means to the writing of an acceptable novel. The nonsupervenience thesis ensures that, for the most part, rationality does not compel me to take these means at any particular time during this interval. I could take today off, and this is fully compatible with my action of writing a novel. And the same goes for next day, and the next day. And, again, at each time I might have a Pareto preference for just taking the day off. But again, if I keep doing this every day, at some point it will be clear that I will not be able to write my novel in the available time.