Prioritisation Principle: in cases of conflict, the Anti-Exploitation criterion takes precedence over the GDL criterion with respect to gender-justice enhancement.
Secondly, a UBI would reduce gendered exploitation in the market for intimate labour, defined as “work that is done primarily be women with intimate parts of their bodies or their intimate physical capacities in exchange for money, favours, or goods”[13] such as sex work or commercial surrogacy. Many women undertake intimate labour solely due to economic deprivation, a concern which a UBI would alleviate. Moreover, even a UBI set below a liveable wage would meaningfully improve the negotiating power of women who perform intimate labour, giving them greater freedom to turn down more dangerous clients such as those who insist on having unprotected sex.

There are two possible ways to motivate this principle. First, I take it to be extremely plausible that feminism ought to be most concerned with improving the lives of the most marginalised women in society. Second, exploitation is morally egregious and calls for urgent rectification; the GDL criterion simply does not carry the same ethical urgency. If one accepts either argument, it follows that there is a prime facie feminist case for endorsing a UBI in terms of its capacity for GJ-E.

I now turn to the issue of GJ-A. I follow Nancy Fraser in taking her Universal Caregiver model[15], whereby social institutions are arranged on the assumption that all individuals undertake both paid work and informal care work, to characterise a fully gender-just society. Could a UBI help us to realise such a society?
[14] I remain neutral as to whether there are further criteria for GJ-E. 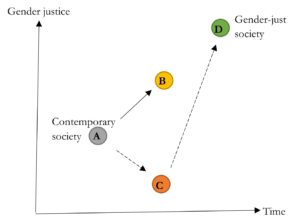 Firstly, consider the exploitable dependence of wives on their husbands in many traditional heterosexual marriages. Their relative lack of economic independence renders these women exploitable by their husbands with respect to the allocation of unpaid housework, the satisfaction of sexual desires, the provision of emotional labour, and more. A key advantage of a UBI is that it is given to individuals rather than households; this reduces the exploitable dependence of women on their partners in two ways. First, it gives women a credible means to leave emotionally or physically abusive relationships, thereby directly lessening their exploitation. Second, even if this exit option is not in fact utilised, its mere existence lessens the asymmetric vulnerability of women within a marriage.

Goodin, R. (1988). Reasons for Welfare. Princeton University Press.
Thirdly, the undemocratic discretion of state officials opens the door to the exploitation of welfare recipients. Due to its unconditional nature, a UBI would protect individuals from low-income households from being as vulnerable to the whim of bureaucrats. To the extent that welfare recipients are disproportionately women, this would mitigate gendered exploitation.

I will assume that at least one of these critiques is successful, and consequently that ‘challenging’ the GDL in some way would result in GJ-E. But what exactly would such a challenge consist in? Suppose that a woman reduced the amount of time spent on housework but experienced feelings of intense guilt and shame as a result, while her husband did the same amount of housework as before with no qualms. Ceteris paribus, the woman’s actions would lessen the GDL, but it is by no means obvious that this outcome is more gender just than before. In response to this, I propose the following as a criterion for GJ-E, which draws on Gheaus (2008):

Robeyns, I. (2001). ‘Will a Basic Income Do Justice to Women?’. Analyse & Kritik 23(1), pp.88–105.
Figure 1
I will set aside the complexities raised by the Question of Scope and focus on a UBI given to adult citizens. In response to the Question of Specification, I will consider a UBI set at a liveable wage which supplements existing welfare institutions and is funded through revenues from publicly owned assets.[2] This is for two reasons. Firstly, I take this to be the most appealing version of a UBI; hence a conclusion that feminists should reject this version would suggest that feminists should reject any UBI proposal. Secondly, I am wary of building in hard limits of political or economic feasibility into my analysis since this forecloses utopian theorising, which is valuable precisely because it challenges conventional views about what is possible.

[9] Gheaus (2008), p2.
This essay was the joint runner up in the graduate category of the 7th Annual Oxford Uehiro Prize in Practical Ethics.
To the extent that a UBI would mitigate the gendered exploitation of women, a UBI would be gender-justice enhancing even if it entrenches the GDL. However, if this is the case, then there is consequently a divergence between the objectives of GJ-E and achievement. Since allowing gendered exploitation would inflict severe injustice on women at the sharpest end of power, GJ-E should take precedence over improving the prospect of realising a gender-just utopia. Hence, there is strong reason on explicitly feminist grounds to endorse a UBI. Nevertheless, whether feminists should ultimately endorse a UBI all-things-considered will depend upon their broader political commitments.
[13] Panitch (2019).
[11] A dependency relationship is exploitable iff there is a power imbalance between agents, and the subordinate agent depends on a particular superordinate agent for a resource over which the superordinate agent has discretionary control. See Goodin (1988), p175-76.