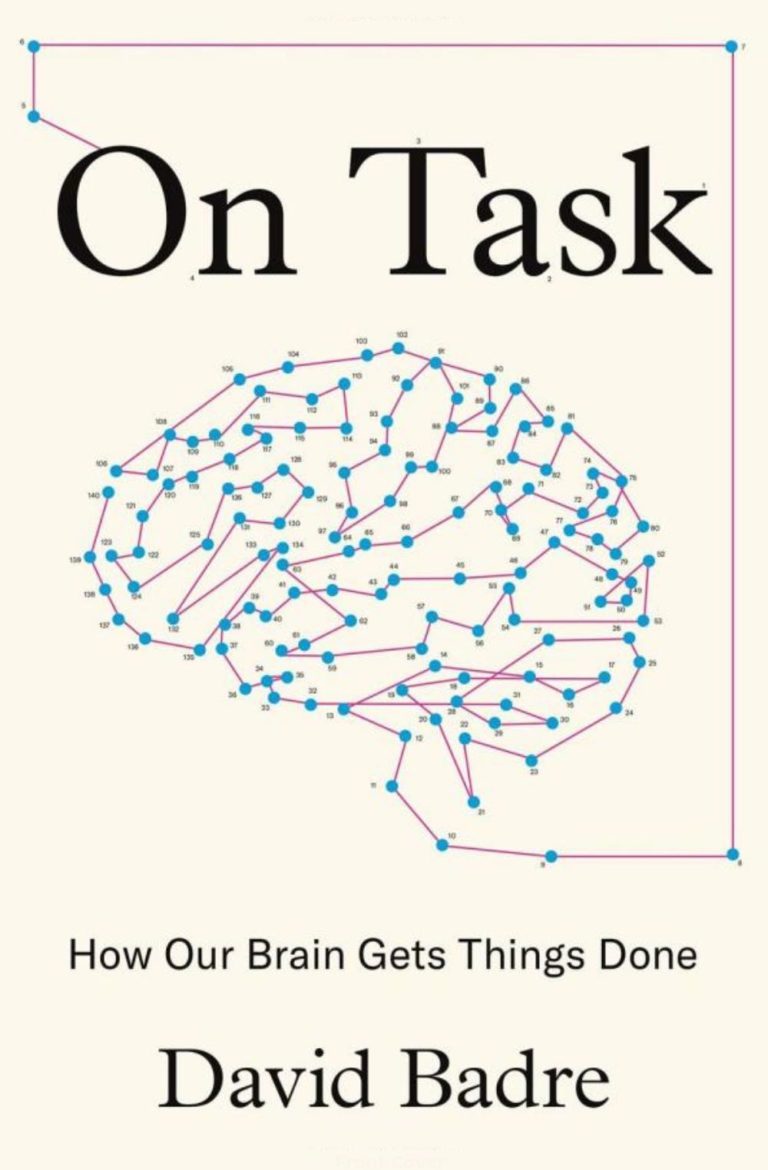 As I detail in the book, there are several arguments as to why this account is dissatisfying. For example, one simple observation is that unlike a muscle, there is no evidence that we ever actually fully deplete our mental resources. Even after hours of doing math problems in your head, you might be tired of doing math problems. You may not want to do anymore math problems. The thought of another math problem may make you queasy. But, if you must, you will still be able to do one more math problem. This isn’t the case with a muscle. At some point, once depleted, you cannot lift even a light weight without resting the muscle, no matter how much you want to do so.
Over the course of this week of posts on The Brains Blog, I have given a brief introduction to a few topics related to cognitive control in hopes of sparking your interest. Beyond treating these topics in greater depth, On Task discusses a number of other topics that I haven’t touched on here. For example, I discuss how we control memory in the service of our tasks. I talk about the problem of multitasking. And I discuss the changes in control that occur over our lifetimes, both in our early development and then as we age. I invite you to explore these topics more and to engage with scientists who study this important, but elusive, cognitive function.

The Costs of Cognitive Effort

Alternatively, the account of effort costs that I favor is that we are more likely to experience a cost from tasks requiring cognitive control because they incur an opportunity cost. We are generally bad at multitasking. Thus, if I am doing one task that demands my attention, I can’t gain value by doing another. So, one way to take account of this opportunity cost in my decision making is through a cost of mental effort for tasks requiring my control systems.
An open question concerns what the source of these effort costs might be. Not every task we do comes with this experience of mental effort. So, what is it about some tasks that we experience them as being effortful?
One of the major shifts in scientists’ thinking about cognitive control in recent years has been the recognition that control is motivated. In other words, we engage cognitive control to plan and guide a task because, at some level, we are motivated to do that task. This simple recognition has led to a shift in theory toward consideration of the value gained by our tasks. For example, task switching might be reframed as a foraging problem, such that we decide whether to stay with a task or shift to a new one depending on their relative value and how that value changes over time. This conceptual shift has allowed control theory to benefit from ideas developed in adjacent areas of decision making, reinforcement learning, and behavioral economics.
There are two sides to our motivation for tasks. First, it is widely recognized that we are driven to invest control in tasks that will lead to outcomes we value. Indeed, the degree to which we use control can be driven by incentivizing outcomes experimentally. Likewise, we already saw how the cortico-striatal gating system learns and is modulated through signaling from neurotransmitters like dopamine that encode information about future expected value. In essence, the system learns to gate contexts when doing so is expected to lead to desired outcomes. So, we engage control to obtain wanted and valuable outcomes. However, there is another part of this equation, the mental effort required to achieve that outcome.
One popular account of this phenomenon is that costs push us to conserve a depletable mental resource that is needed for control. When we perform a demanding task, like doing a math problem in our head, we use up that mental resource. With lots of mental work, this mental resource gets depleted, and like a muscle, our capacity to do a task well is diminished. This longstanding idea has been at the basis of some popular accounts of willpower.
There are some ways to accommodate these and other arguments from a resource depletion perspective. However, the main reason that I doubt this depletion view is that the empirical evidence in favor of it, such as from the ego depletion procedure, is increasingly in question, with some recent prominent failures to replicate.
Thank you for reading this week.

When we mentally invest in certain tasks, we experience an aversive experience of cognitive effort. People will treat this effort as a cost and will discount the value to be obtained from a task they are doing accordingly. Indeed, when given the option of freely choosing between two or more tasks of similar value, people will usually avoid the ones that elicit an experience of more mental effort. In other words, we don’t simply perform tasks based on their expected outcome. We do a cost-benefit analysis and invest mental energy to the degree that doing so yields an outcome that outweighs the cost. And, there is evidence that the same dopamine systems that signal the expected value of a task also convey information about the effort costs.
Regardless of the source of effort costs, however, there are important implications that come from recognizing that motivation derives both from a task’s value as well as the mental investment it demands. For example, consider a patient with a motivational problem who is not driven to perform a particular task. Intuitively, we might assume that this patient is undervaluing the outcome of that task. But, instead, they might be overestimating how much mental investment is needed. Or, they may be accurately predicting the mental investment, but are placing a greater cost on that effort. Whether one attributes a motivational deficit to one or all of these factors changes one’s account of the underlying cause and how to intervene.