If that’s right, can the law do anything about it?
Could any reasonable decision-maker, balancing the risk of earthquake against the benefit of a tiny reduction in fuel prices, take the risk? The balancing act concerned isn’t one that can rationally be delegated to risk managers or regulators. The irrationality is at the legislative source. EU law might have provided a remedy.
The risks associated with fracking have been much discussed. There is widespread agreement that earthquakes cannot be excluded.
That choice must, however, comply with the principle that the protection of public health, safety and the environment is to take precedence over economic interests . . .’1
In the regulation of environmental, health and safety risks, “precautionary principles” state, in their most stringent form, that new technologies and policies should be rejected unless and until they can be shown to be safe. Such principles come in many shapes and sizes, and with varying degrees of strength, but the common theme is to place the burden of uncertainty on proponents of potentially unsafe technologies and policies. Critics of precautionary principles urge that the status quo itself carries risks, either on the very same margins that concern the advocates of such principles or else on different margins; more generally, the costs of such principles may outweigh the benefits.
But EU law is rather disappointing. A recent exhaustive review of the precautionary principle in EU law concludes:
Well, perhaps. If your house crumbles – or might crumble – under you as a result of fracking, Article 8 of the European Convention on Human Rights (the most elastic of the Convention articles, which, broadly, protects your right to live your life as you choose, and certainly extends to proteting the environment in which one lives) might help.
But we’re now beyond the reach of the European Court, and soon retained aspects of EU law will be excised from English law.
Whichever version of the principle one adopts, it seems that the UK Government’s decision falls foul of it. Even if one accepts (controversially) that the increased flow of gas from fracking will not in itself cause harm (by way of climate disruption), it seems impossible to say that any identifiable benefit from the additional gas (which could only be by way of reduced fuel prices) clearly outweighs the potential non-excludable risk from earthquakes (even if that risk is very small).
There are some reasons (I hesitate to say that they are good reasons) why a general approach to the precautionary principle should be so cautious. But would they, if EU law extended to the UK, apply to the case of fracking?
By Charles Foster 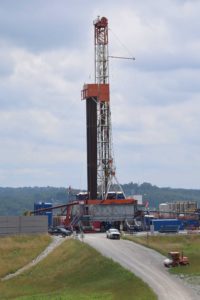 Image> Leolynn11, CC BY-SA 4.0 <https://creativecommons.org/licenses/by-sa/4.0>, via Wikimedia Commons
Under the Article, one’s right to self-determination (in 8(1)) has to be balanced against wider societal interests (in 8(2)). It would be possible to frame the precautionary principle in the context of fracking as a contest between 8(1) and 8(2) in which (if I’m right in saying what I have said above about risks and benefits), 8(1) comes out the very clear winner. And if that’s right, legislation permitting fracking might be read in such a restrictive way that the dangers are eliminated (the court’s primary objective) or, if that’s impossible, made the subject of a ‘declaration of incompatibility’ with the Convention, requiring the UK Government to get its legislative act in order. Other Convention articles (for instance Article 2, which protects the right to life) might be engaged too.
Acknowledgement
I am very grateful to Menelaos Markakis for his helpful comments on a draft of this post.
The precautionary principle springs immediately to mind. There are many iterations of this principle. The gist of the principle, and the gist of the objections to it, are helpfully summarised as follows:
It might be worth a go.
Might there be a domestic remedy – or a remedy in the European Court of Human Rights, to which the UK is still subject?
The UK Government has lifted the prohibition on fracking.
The principle has been invoked in the courts. The Court of Justice of the EU (‘the European Court’), for instance, observed that:
[W]hether to have recourse to the precautionary principle depends as a general rule on the level of protection chosen by the competent authority in the exercise of its discretion . . . .
That last paragraph looks hopeful for fracking objectors. Or it would if the UK were still in the EU.

‘that judicial review can hardly do justice to the precautionary principle, as applicable to the risk management process and underpinning EU legislative frameworks. It will ultimately rest on EU risk managers and EU legislators to ensure that the principle is applied and that its overarching goals are pursued.’
References