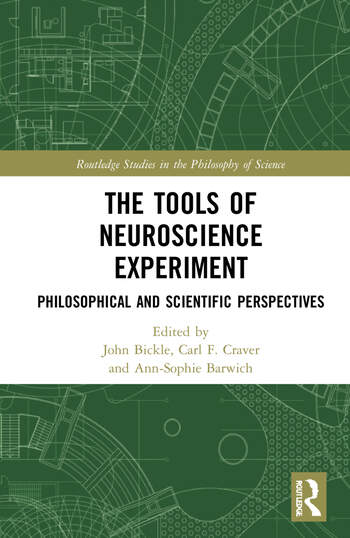 John Bickle, Mississippi State University and University of Mississippi Medical Center
The chapter’s fundamental conclusion is that the new experiment tools on whose use our best current theories in neurobiology depend are themselves the product of atheoretical laboratory “tinkering”: “fooling around,” to borrow Hacking’s phrase; seat-of-the-pants practical finagling; trial-and-error, shot-in-the-dark, make-it-work persistence. So theory in lab-based sciences such as neurobiology is triply dependent: atheoretical laboratory tinkering generates new research tools; new research tools generate theorical progress. This is not the picture of science that one learns in high school or undergraduate science education. “Theory-centric” accounts of scientific methodology, such as hypothetical-deduction, Popperian conjectures and refutations, Kuhnian paradigms, or even Bayesian statistics don’t even approximate it. (For the last approach, think of the role played by prior probability of the hypothesis and of the evidence given the hypothesis).
My second example in “Tinkeirng” is Erwin Neher’s and Bert Sakmann’s invention of the patch clamp. For the past four decades neurobiology has undergone a “molecular revolution”; the patch clamp was very much that revolution’s spark. Developed throughout the mid- to late-1970s, the patch clamp offered electrophysiologists the ability to measure ionic currents in the single picoampere range from tiny areas of treated neuron membrane. “Tiny” is an understatement here. The size of membrane patched onto by the pipette tip were as small as single microns. A picoampere is one-millionth of one-millionth of an ampere (10-12). This tool was literally measuring ionic currents through single ion channels or receptor proteins. It was instrumental in the discovery and characterization of the proteins that serve as these channels and receptors. And its capacity to penetrate the neuron membrane opened the door to intervention experiments that quickly revealed the universe of intracellular signaling pathways in neurons. A metascientific investigation of Neher’s and Sakmann’s development of the patch clamp gives us another glimpse into laboratory tinkering. But in this case, both Neher’s and Sakmann’s initial reliance on “theory” to improve the seal between pipette and neuron led to four years of failure. Only a stroke of luck by these two observant experimentalists and their labmates revealed the strategy for reliably establishing the “gigaseal.” And the rest, as they say, was history. Neurobiology was forever changed, and our current best-supported theory across all of neuroscience, the structure and function of ion channels, active transporters and ligand-activated receptors, quickly followed. I close “Tinkering” with two philosophical conclusions. First, if you’re of the opinion that neuroscience “needs more theory,” the lesson of “Tinkering” is that building new and better research tools has been the best strategy for theory progress since neuroscience’s inception. Second, the case of David Hubel raises an intriguing speculation worthy of further metascientific reflection. Are the best laboratory tinkers scientists who are less beholden to “theory”? Hubel certainly wasn’t theory-beholden. Is this a general feature to be found by metascientific reflection on cases of revolutionary research tool development? And if it is, is “tinkering” something we can institute into our scientific education? Hugely successful recent research funding endeavors like the BRAIN Initiative (Brain Research through Advancing Innovative Neurotechnologies®https://braininitiative.nih.gov) suggest that neuroscientists recognize the role that experiment tool development plays in neuroscientific progress. Might education in and funding opportunities for outstanding laboratory  tinkers be neuroscience’s next great step forward?
I begin “Tinkering in the lab” by reviewing my previous publications on tool development in neuroscience. I take that work to suggest that in lab-based sciences such as neurobiology, theory is secondary to and entirely dependent upon, both historically and epistemically, the development and ingenious uses of new research tools. I locate these concerns within the broader metascientific framework of experiments that UCLA neurobiologist Alcino J. Silva, neuroinformaticist Anthony Landreth, and I first laid out in our 2014 book, Engineering the Next Revolution in Neuroscience (Oxford University Press). I relate my arguments to the well-known work of philosopher Ian Hacking on the importance of “engineering” in the development of microscopes. Then I propose in the rest of the chapter to further “put theory in its place.”
How might one argue for such an unconventional view? For me, it was a matter of using the same approach I’ve advocated since my 2003 book, Philosophy and Neuroscience: A Ruthlessly Reductive Account (Springer): metascience, the detailed investigation of case studies on their own terms, cut loose from philosophical assumptions about what one will (or should) find. In “Tinkering” I detail two case studies of tool development in neurobiology. The first is David Hubel’s mid-20th century development of the metal microelectrode, to replace the glass micropipette electrodes, and for the first time to permit electrophysiological recordings from single neurons in visual cortex during experiments that lasted for hours, in order to map out the field properties of these neurons’ responses. Glass micropipette electrodes with tips sufficient for single-neuron recording bent or broke during such extended recording sessions. To Hubel, metal was the “obvious” choice. But no theory guided his meanderings on how to polish tips sufficient for single-cell recordings or to drive the electrodes to precise locations in cortex. He succeeded, though not without failures and setbacks. The nature of his work, as reported in memoirs and notes by himself and his labmates, offers us a first glimpse of one kind of atheoretical laboratory “tinkering”; in this case, one producing a tool that dominated neurobiological research for a quarter-century.