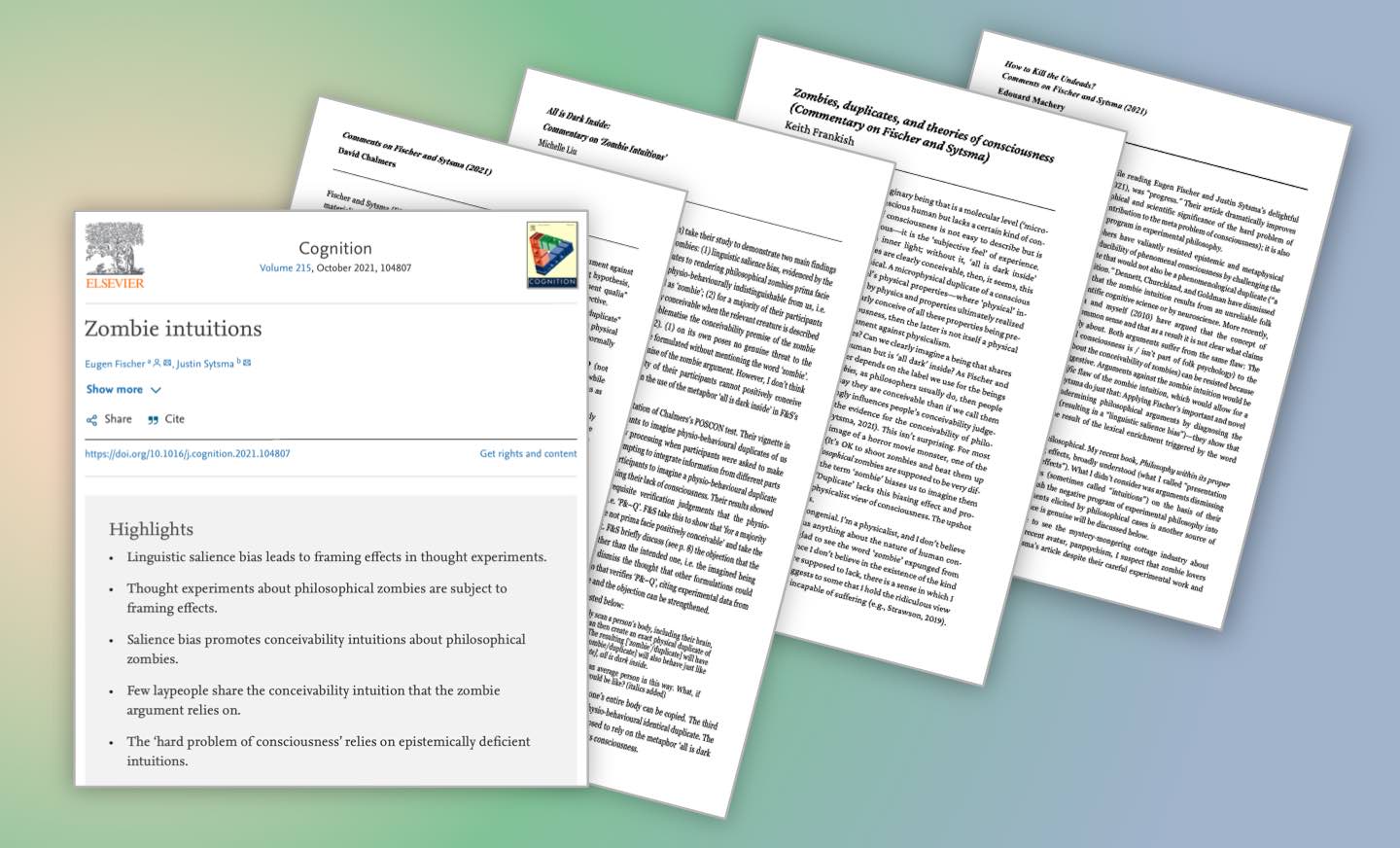 We’re pleased to introduce our latest symposium discussing “Zombie intuitions”, by Eugen Fischer (University of East Anglia) and Justin Sytsma (Victoria University of Wellington), with commentaries by David Chalmers (NYU), Keith Frankish (Sheffield), Michelle Liu (Hertfordshire), and Edouard Machery (Pittsburgh). We thank all of the participants for their contributions!

‘Zombie intuitions’ significantly extends the evidential and negative research programs in experimental philosophy: Negative experimental philosophy has focused on arguing against the evidentiary value of particular case intuitions by documenting framing, order, and demographic effects. “Zombie intuitions” digs deeper (without coming up muddier): It examines the etiology of the targeted intuitions. Explanations support more specific conclusions: The documentation of framing effects merely tells us that we cannot trust just any intuition about the given topic (say, philosophical zombies). Explanations of framing effects, e.g., in terms of linguistic salience bias, can adjudicate between frames and tell us which intuitions, elicited by which frame, to discard, and which to potentially take into account. The linguistic salience bias account of intuitions about philosophical zombies tells us that frames that use the word “zombie” are illicit, while intuitions elicited with neutral frames may support philosophically interesting conclusions.
At the same time, the paper initiates the empirical examination of conceivability intuitions, by examining judgments concerning the conceivability of philosophical zombies that provide the basis for the ‘zombie argument’. A pre-study shows that lay participants cannot competently answer direct questions about conceivability. The main study therefore implements a test, first outlined by Chalmers, that uses vignettes to prompt participants to imagine a relevant scenario and then elicits verification judgments about the imagined situation. The investigation of conceivability intuitions about scenarios of dubious coherence (i.e., most scenarios that are philosophically interesting!) has to contend with difficulties arising, e.g., from shallow processing, where readers fail to integrate information from different parts of the vignette. Target paper, commentaries, and author response explore, among other things, how to deal with these difficulties and make philosophical conceivability claims empirically tractable.
The full article is available from Cognition (10.1016/j.cognition.2021.104807) and a free preprint is available from PhilArchive (philarchive.org/archive/FISZIv1).
“Zombie intuitions” explores a methodologically inconvenient phenomenon: In philosophical thought experiments, as in ordinary discourse, our understanding of verbal case descriptions is enriched by automatic comprehension inferences. Such inferences have us routinely infer what else is also true of the cases described. The paper considers how such routine inferences from polysemous words can generate ‘zombie intuitions’: intuitions that are ‘killed’ (defeated) by contextual information but kept cognitively alive by the psycholinguistic phenomenon of linguistic salience bias.
Fischer and Sytsma explore whether this bias vitiates intuitions at the root of the ‘hard problem of consciousness’: Three corpus studies, four surveys, and an experiment examine whether intuitions about philosophical zombies are zombie intuitions. They show that “zombie” is an unbalanced polyseme whose philosophical use meets all the conditions for linguistic salience bias. This bias means that rare (e.g., philosophical) uses of the word trigger default inferences that are supported only by the dominant sense, and that influence further judgment and reasoning even when they are explicitly cancelled by the context. This leads to framing effects: people respond differently when reading vignettes that talk of ‘zombies’ rather than ‘duplicates’. The main study documents such framing effects – and finds that only a small minority of lay participants find philosophical zombies conceivable, when a neutral frame is used. The paper then argues that these findings support a deflationary response to the ‘hard problem’: The impression that principled obstacles prevent scientific explanation of how physical processes give rise to conscious experience may ultimately rest on epistemically deficient intuitions.

Michelle Liu – “All is Dark Inside”

Edouard Machery – “How to Kill the Undeads?”