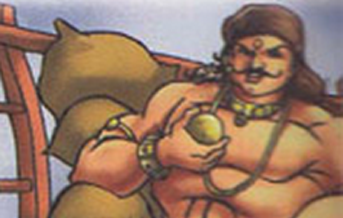 Narration from the Brahma-Vaivarta Purana

Vyasadeva replied, “You should fast without drinking even water on the Ekadashi that occurs during the light fortnight of the month of Jyeshtha (May-June) at the time of Mithuna Sankranti when the sun travels from the sign of Vrishabha (Taurus ) to Mithuna (Gemini). One must certainly not eat anything, for if he does so he breaks his fast. This rigid fast is in effect from sunrise on the Ekadashi day to sunrise on the Dwadasi day. If a person endeavours to observe this great fast very strictly, he easily achieves the result of observing all twenty-four other Ekadashi fasts throughout the entire year.
“O Vrikodara (voracious eater), whoever fasts on this Ekadashi in one instance receives the merits of bathing in all the places of pilgrimage, giving profuse charities to worthy persons, and fasting on all the dark and light Ekadashis throughout the year. Yamadutas will not approach him at death. Rather, the Vishnu-dutas will take him to the supreme abode of Vishnu.”

Vyasadeva said, “If you want to ascend to the spiritual world, you must observe Ekadashi on both the dark and the light fortnights.” Bhima protested, “Learned grandsire, I cannot live if I eat just once a day, then how can I fast? Within my stomach burns the agni (fire) called Vrika – the fire of digestion. Only when I eat heartily at every meal, is this Vrika agni satisfied. O great sage! I would be able to fast only once in a year so I beg you to please tell me about that Ekadashi fasting on which my obligation for fasting on all other Ekadashis is fulfilled. I shall faithfully observe that Ekadashi and become eligible for liberation.”
Srila Vyasadeva instructed Bhima to engage in japa (chanting of the Lord’s holy names) on this Ekadashi day and on the next give charity to brahmanas and serve them prasadam. Bhima could then break his fast, taking prasadam with a brahmana. Vyasadeva extolled this perfomance of Ekadashi saying by observing it as recommended hundred previous generation would be liberated even if they may have been very sinful.
Srila Vyasadeva concluded, “I strongly urge you to fast on this auspicious, purifying, sin-devouring Ekadashi in just the way I have outlined. Thus you will be completely freed of all sins and reach the supreme abode.” He assured Bhima that the performance of this Ekadashi would be very pleasing to the supreme Lord, Keshava.
Bhimasena said to Vyasadeva, “O learned grandfather, my brothers Yudhisthira, Arjuna, Nakula and Sahadeva, my dear mother Kunti as well as my beloved wife Draupadi, all fast on each Ekadashi, strictly following all the regulative injunctions of that sacred day. They tell me to fast as well. But, learned grandfather, it is impossible for me to live without eating, because being the son of Vayudeva, I am unable to bear hunger. I can give charity and worship Lord Keshava with all kinds of upacharas (items) but I cannot fast on Ekadashi. Please tell me how I may obtain the merits of observing Ekadashis without fasting.”
When the other Pandavas heard about the benefits of following Jyeshtha-Shukla Ekadashi, they resolved to observe it as well. On this Ekadashi, they would refrain from eating or drinking anything, and thus it came to be known as ‘Pandava Nirjala Ekadashi.’
Ekadashi is an important day in the lives of devotees of Lord Krishna. It’s a day of austerities and intensified devotional practices. These recommended days of fasting are meant for learning to transcend the bodily needs, especially food, and fix one’s consciousness on one’s constitutional position as a loving servant of the Supreme Personality of Godhead, Krishna.
This year Pandava Nirjala Ekadashi falls on 21st June 2021.
Once Bhimasena, asked the Srila Vyasadeva, the grandfather of the Pandavas, whether it was possible to return to the spiritual world without having observed fasting for Ekadashis.
Of all Ekadashis, the Jyestha Shukla Ekadashi, which falls in the hottest time of the year called Grishma ritu, is hardest for observing austerities. The summer is at its peak in the northern hemisphere and water is essential. On this Ekadashi one is supposed to fast not only without food but also without water. The glory of this Ekadashi is described in the Brahma-Vaivarta Purana in a conversation between Veda Vyasa and Bhimasena.
Click here to know – “How to observe ekadasi as per Srila Prabhupada’s instructions?”