You and your two fellow astronauts are on your way to Mars when you uncover a stowaway in your spaceship. His mere presence means there won’t be enough oxygen for anyone to survive the journey. You toss him out the spaceship, of course. But what if that stowaway is there by accident – through absolutely no fault of his own? Would you still throw him out, though perhaps feel extra bad about it?
That, without giving too much of the plot away, is the moral dilemma on which the recent Netflix film ‘Stowaway’ is built. It’s an enjoyable watch, especially if you are into the kind of old school science fiction that involves those tense but fairly long scenes of someone just walking on the outside of a spaceship in a spacesuit. Crucially, as films go, it deals with its moral dilemma fairly thoughtfully.
In fact, we could appeal to some form of consequentialism instead of a right to self-defense to respond to all cases of someone posing a serious threat. It may well be that a world where people are allowed defend themselves from a threat has better consequences than one where people are not, and of course we can place all sorts of exceptions and caveats for specific situations (as we would when it comes to the right to self-defense). 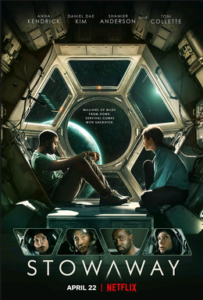 One reason is the role the stowaway plays in the causal chain leading to the threat. Even though it’s through no fault of his own, it is his presence (and not someone else’s) that is causing the threat. In the sheriff case, the innocent person just isn’t a relevant part of that causal chain – their presence has nothing to do with the threat of a riot.

The stowaway in Stowaway, like the average COVID-carrier, is of the third category in that he ends up on the spaceship and disrupt the oxygen supply through no fault of his own. In debating whether it’s justified to jettison him off the spaceship, there is an alternative to appealing to a right to self-defense. The three crewmembers could cash out the dilemma in terms of consequences: The crew is trained for the mission and will be conducting crucial experiments on Mars – the stowaway has nothing to contribute in that regard. What he offers, in that context, is less valuable, and so he should be the one who is jettisoned, not one of the three original crew.
At its heart is a question about what we can justifiably do to people who pose a serious threat to others through no fault of their own. It’s a scenario that comes up a lot in the ethics of self-defense. Philosophers typically distinguish three classes of harming someone in self-defense or in defense of another:
But why is this (non-consequentially) relevant? They are both equally blameless, equally undeserving of any punishment. What does it matter how causally close or distant they are to what led to the threatening situation? Imagine we uncovered that in the sheriff case, the innocent person who is to be framed did indeed play a direct role in the causal chain that led to murder: imagine that they had accidently tripped and bumped into the real culprit the day before, and that it was this event that somehow frustrated the would-be murder, who would not have committed the murder otherwise. Does that make them any more appropriate a target in trying to neutralize the situation? Are they closer to the stowaway’s role now, since we can point to their proximity in the causal chain leading to the threat?
Many people, perhaps most(?), think if the person in the third category is going to kill you by falling on you, appealing to a right to self-defense can justify killing them first, at least if there really is no alternative. So you might justifiably, say, slice them in half with the lightsaber you are carrying around with you in this unlikely thought experiment. Less drastically, the past year suggests most of us think it’s justified to put some cost on people who refuse to isolate if they catch COVID, even though they likely caught it through no fault of their own. And one way we can justify that cost to the infected is by appealing to the right to self-defense, or defense of another or of society more generally. By not isolating, they are posing a threat to others, and so we have a right to coerce them in some proportionate way to isolate.
On the other hand, it’s difficult to find a morally relevant, non-consequential difference between the innocent person in the sheriff case, and the stowaway. The consequentialist will be sensitive to the bad consequences of framing someone, of the deception potentially being uncovered, and so on. But even if the thought experiment controls for these, there is typically still a strong intuition that someone like the stowaway is different from the innocent person in the sheriff case. But why?
But the appeal to consequentialism in these scenarios opens the door to the old ‘utilitarian sheriff’ case: what if the only way that you, the sheriff of a town, could stop a devastating riot by a lynch mob is to pin the blame of an unsolved murder on an innocent person? Consequentialism may allow for this. In contrast, an appeal to a right of self or other defense cannot, since the innocent person to be framed is not the relevant source of threat: defensive acts, seemingly by definition, must be against the attacker or at least actual source of the threat.
The official image for the 2021 film Stowaway. The poster art copyright is believed to belong to the distributor of the film, Netflix, or the graphic artist.
I fail to see the moral relevance of merely being part of the causal chain leading to a threat, and so can think of no non-consequentialist way to make a principled distinction between the stowaway in Stowaway and the innocent person in the utilitarian sheriff case. I think that this makes appealing to consequences instead of self-or-other defense in these cases less controversial than it’s generally taken. Or perhaps it should make appealing to self-defense in these cases more controversial. Either way, Stowaway is entertaining food for thought.