He waded through the gathered crowd and humbly requested Jagai and Madhai to give up their wicked ways and chant Hare Krishna. The two brothers became furious and Madhai threw a piece of a broken earthen pot at Him. Lord Nityananda was hit on the forehead and began to bleed. Undaunted by this manic aggression, the Lord continued to plead with them to chant. When Lord Chaitanya heard of the incident, He instantly appeared there in great anger and invoked His Sudarshana Chakra to kill the two rascals. Lord Nityananda begged for the Lord’s clemency reminding Him that in this incarnation he would not take up weapons against the demons. The Lord relented only on the condition that the two brothers would eschew their sinful ways and absorb themselves in devotional service by chanting Hare Krishna. The frightened brothers pleaded for the Lord’s mercy and surrendered to Him. Thus it was by the unfathomable mercy of Lord Nityananda that two demons took shelter of Lord Chaitanya and became pure devotees. After the incident,  thousands of people came into the fold of Lord Chaitanya’s Sankirtana movement.
Lord Nityananda gives His mercy to Jagai & Madhai 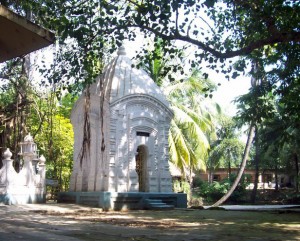 The two then went on a pilgrimage to all the holy places in both Northern and Southern India much like Lord Balarama had done five thousand years ago.

Bala means strength, not bodily power but spiritual strength. Lord Balarama is the first expansion of Sri Krishna, the Supreme Personality of Godhead. Balarama is described in the scriptures as the predominating Deity of the sandhini shakti (existential potency) of Lord Krishna. Balarama is a svamsha (direct) expansion of the Lord, and therefore there is no difference in potency between Kṛishṇa and Balarama. However, they differ in two aspects – bodily structure and mood. Krishna has the bluish-black complexion of freshly formed monsoon clouds while Balarama has the fair complexion of newly formed spring cloud. Lord Krishna is in the mood of accepting service while Balarama is in the mood of rendering transcendental loving service to the Lord. In fact, He teaches us how to express love through service. 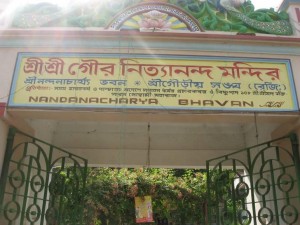 Garbhavas: The place where Nityananda Appeared in the village of Ekachakra

On this auspicious occasion of Nityananda Prabhu’s appearance day, let us pray to him fervently to be blessed with eternal, loving devotional service unto Sri Krishna.
Five hundred years ago, when Lord Krishna appeared in Navadvipa as Lord Chaitanya, Balarama appeared with Him as Lord Nityananda. He took birth in Ekachakra, a small village in present-day West Bengal in the year 1473. His father, Hadai Ojha and mother Padmavati, were pious Brahmins originally from Mithila. Nityananda Prabhu was born on the auspicious thirteenth day (trayodashi) of the bright fortnight (Shukla paksha) of the month of Magha. As a child, Nitai (as Nityananda Prabhu was called), loved to enact pastimes from Bhagavata and Ramayana. He so excelled at playing Lakshman or Balarama that the audience began to suspect Him to be an incarnation.
Nityananda Jayanti is the appearance day of Lord Nityananda, who is Lord Balarama Himself.
The following is a pranama mantra for Sri Nityananda Prabhu. It may be offered to Lord Nityananda on the day of His appearance. 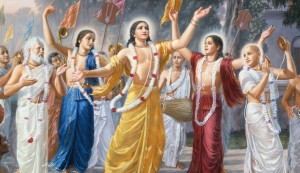 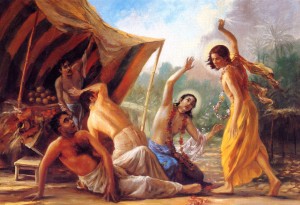 When He was thirteen, a traveling sannyasi visited the Lord’s parents and requested them to send Nitai with him as a traveling companion. His parents committed to Vedic culture were unable to decline his request and reluctantly agreed to send Nitai.

Sri Baladeva is the servitor Godhead, who assists in Lord Krishna’s transcendental pastimes. In His Purusha forms (Karanodakasayi, Garbhodakasayi, and Kshirodakasayi Vishnu), He is responsible for the cosmic manifestation. In the Shesha form, He is responsible for personal service to Sri Krishna.
When Lord Nityananda arrived at Nadia, West Bengal, He met Sri Chaitanya Mahaprabhu. It was at the home of Nandan Acharya, a great devotee of Lord Chaitanya, that Lord Nityananda and Lord Chaitanya met for the first time.

Lord Nityananda was an ocean of compassion and mercy to the extremely fallen souls of kali yuga. He delivered the degraded brothers Jagai and Madai who were debauchees of the worst type. They were not just drunkards but also meat-eaters, woman-hunters, dacoits and sinners of all description. When Lord Nityananda saw the ruffians creating a ruckus on the streets, he thought that if he could bring these fallen souls to the path of pure devotion, people would develop a strong faith in the movement of Lord Chaitanya.
māyātīte vyāpi-vaikuṇṭha-loke
pūrṇaiśvarye śrī-catur-vyūha-madhye
rūpaṁ yasyodbhāti saṅkarṣaṇākhyaṁ
taṁ śrī-nityānanda-rāmaṁ prapadye

I surrender unto the lotus feet of Śrī Nityānanda Rāma, who is known as Saṅkarṣaṇa in the midst of the catur-vyūha [consisting of Vāsudeva, Saṅkarṣaṇa, Pradyumna and Aniruddha]. He possesses full opulences and resides in Vaikuṇṭhaloka, far beyond the material creation. 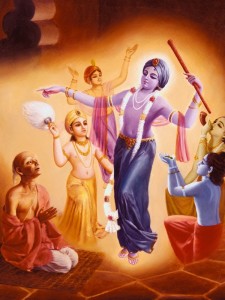 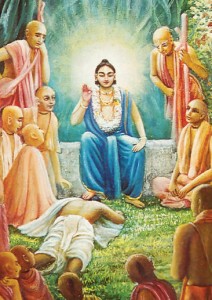 In this Kali-yuga practically all people are of the quality of Jagai and Madhai. If they at all want to be relieved from the reactions of their misdeeds, they must take shelter of Lord Caitanya Mahaprabhu. However, Mahaprabhu cannot be approached directly without the guidance of a guru. Balarama is the fountainhead of guru-tattva, and he has appeared as Nityananda. Therefore we need to take shelter of Nityananda Prabhu. Only through His mercy shall we get the spiritual strength to understand and approach Chaitanya Mahaprabhu, who is Sri Krishna Himself.
Nityananda Prabhu was thirty-two then. It was here that they together commenced the onerous work of establishing the Sankirtana movement for the benefit of people in the Kali yuga.

The place in Nadia where Lord Chaitanya and Lord Nityananda met for the firs time.