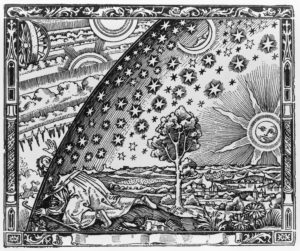 Provided my eyes are not withdrawn from that spectacle, of which they never tire; provided I may look upon the sun and the moon and gaze at the other planets; provided I may trace their risings and settings, their periods and the causes of their travelling faster or slower; provided I may behold all the stars that shine at night – some fixed, others not travelling far afield but circling within the same area; some suddenly shooting forth, and others dazzling the eye with scattered fire, as if they are falling, or gliding past with a long trail of blazing light; provided I can commune with these and, so far as humans may, associate with the divine, and provided I can keep my mind always directed upwards, striving for a vision of kindred things – what does it matter what ground I stand on?

Seneca, Consolation to Helvia, translated by C. D. N. Costa
A wave of self-help literature has washed in over western societies in recent decades in a response to the psychological unrest of our times. There is an anxiety in the age of the Anthropocene, caused by new and greater moral and existential uncertainties and related to the high complexity of the global and online modern world, the recognition of the growing existential risks in the future of humanity and the planet and to new insights and developments in science and technology that challenge conventional conceptions of what it means to be human and undermine the anthropocentric and humanistic world view. And this existential anxiety is accompanied by an increase in the interest in philosophical guidance and the demand for life-advice.