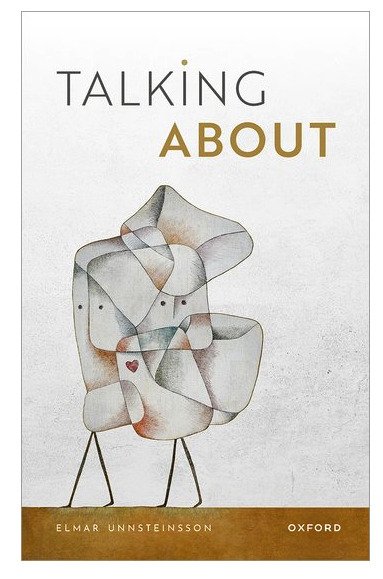 As indicated before, I have pitched this at an extremely general level, but I hope to introduce more details in later posts. And, of course, the book should contain enough detail for anyone.
How come only philosophers care about Frege’s puzzle? My favourite answer is the following. Most of the time, they have not considered the issue of how to make the puzzle sound like it is worth anyone else’s time. There are very important exceptions, of course, and Jerry Fodor’s work is perhaps the most obvious testament. But there are others! In this short post, however, I can only focus on spelling out my own perspective.
This is the first post in a series of five about my recent book, Talking About: An Intentionalist Theory of Reference (OUP, 2022). I will start things off by trying to convey the most basic motivation behind the book in terms that should be broadly accessible to theorists and philosophers of different stripes. This broad brush will be applied to the Preface, Introduction and parts of Chapters 5 and 6. In the next four instalments, I shall try to narrow my focus on some more specific themes; confusion, implicit attitudes, speaker meaning, and referential competence.
Before answering Frege’s puzzle – and many other puzzles in the same family – we must place it within some much broader explanatory project. Otherwise we have very little by way of comparing different solutions. I propose that this project should revolve around the question of normal human pragmatic competence. Very roughly, this just means the human capacity for acts of speaker meaning, where such acts are explained by positing some proprietary set of mental states. Normal adult humans will have acquired both productive and interpretive competence. The speaker’s production of speech acts comes first in the order of explanation, simply because the hearer’s interpretation seems not to be involved in explaining or constituting the message intended or expressed. It is also important to distinguish narrow and broad aspects of pragmatic competence, as the former involves the proprietary mental states while the latter may include any mental state whatsoever. The latter may more readily be thought of as communicative skill, because it incorporates the speaker’s overall capacity for reasoning, mindreading, and creativity.
Finally, as a third consequence, we should not posit Fregean senses. Provocatively, but also in a playful spirit, I claim in the book that Frege’s Curse hangs over analytic philosophy of language. The Curse is Frege’s implicit message, in ‘On Sense and Reference,’ that we should unlock the puzzle about identity and the puzzle about opaque contexts, with one and the same key. For him the key was the distinction between sense and reference. In my book, I argue that these puzzles require very different treatments; identity will involve the dysfunction of a mechanism, while so-called opaqueness will involve a much simpler distinction between representational states and representational acts or dispositions.
Link to the book.
Why normal though? Well, borrowing a page from the New Mechanists and a few ideas from the teleosemantic tradition, I think we must assume that, ultimately, any specific cognitive competence will be explained in terms of some mental mechanism. We should assume, more specifically, that there is some mechanism in the mind whose function it is to produce a specific phenomenon or effect. I propose to identify the characteristic function of the mechanism involved in pragmatic competence as that of producing well-formed acts of speaker meaning. We are trying to paint a comprehensive picture of the cognitive capacities of human beings. Thus, when we posit mechanisms of memory – systems like episodic or semantic memory, or operations like retrieval or storage – we make a lot of empirical assumptions. For example, we assume that there is such a mechanism and that it exists in normal humans because it serves one or more beneficial functions. I assume that the mechanism of pragmatic competence serves the function of producing normal speech acts which, in turn, serves the function of making communication much more attainable than it would otherwise be.