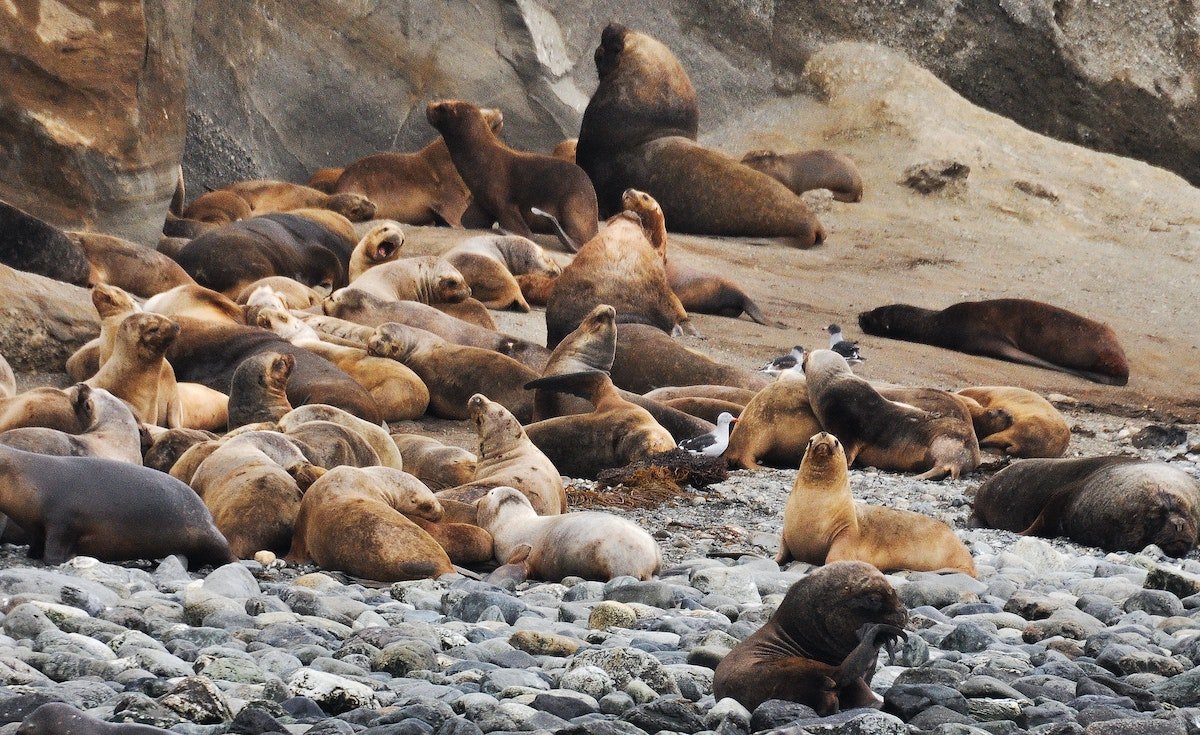 * * * * * * * * * * * *
Fortunately, it is possible and feasible to carry out community science projects that do measure educational outcomes. In our case, we administered a pre- and post-test composed of multiple-choice questions, Likert scale survey items, and open-ended questions to measure three kinds of outcomes—knowledge of the nature of science, knowledge about sea lions, and attitudes toward conservation. Between the pre- and post-tests, we found statistically significant increases in correct answers to questions measuring knowledge of the nature of science and knowledge about sea lions. We also found that participants’ views of nature became more pro-environmental over the course of a field season.
The term “scientist” is younger than the United States of America. William Whewell first used it, famously, in 1833, to describe the mathematician and astronomer Mary Somerville. Before the invention of the term, empirical researchers were more often called “natural philosophers” or “men of science.” These researchers differed from the scientists of today in more than just name. “Scientist” has only been a salaried occupation for about one hundred and fifty years. Until late in the eighteenth century, science was an amateur pursuit, not a professional one, which meant that researchers had to finance their own projects, fundraise, or rely on wealthy patrons for support.

Community Science and Philosophy of Science

The term “scientist” is younger than the United States of America. William Whewell first used it, famously, in 1833, to describe the mathematician and astronomer Mary Somerville. Before the invention of the term, empirical researchers were more often called “natural philosophers” or “men of science.” These researchers differed from the scientists of today in more than just name. “Scientist” has only been a salaried occupation for about one hundred and fifty years. Until late in the eighteenth century, science was an amateur pursuit, not a professional one, which meant that researchers had to finance their own projects, fundraise, or rely on wealthy patrons for support.

Kovaka rightly points out that when it comes to its appearance in philosophy of science discussions, community science is usually that thing that is talked about rather than something that is used in the practice of philosophizing about science. While discussion over community science as a particularly interesting epistemic object or process is indeed valuable, I agree with her that it also provides an innovative way through which students and others can think together and a mode of research to better understand how groups generate knowledge. The design and protocol she describes with reference to the high school students’ community science project in the Galápagos Islands provides a wonderful example of how philosophers of science can use community science projects to examine not only what knowledge is generated through the activities of community science, but also—and importantly for this symposium—what are the effects on those participants. Her suggestion, that the designers of community science projects consider building into their projects assessments that can capture information about educational outcomes as well as how the beliefs and attitudes of the participants changed as a result of the project, is one that I hope will be widely taken up in future research.
Answers to these sorts of questions are, it turns out, directly relevant to key ideas in social epistemology. One such idea is the controversial “diversity trumps ability” theorem. More precisely, the idea is that a group of epistemically diverse agents can outperform a group of more homogenous agents, even when this latter group has expertise relevant to the task in question (Hong and Page 2004). Philosophers and social scientists have investigated the claim that diversity trumps ability using agent-based models, and Hong and Page’s model has been the locus of a lively debate for nearly two decades. But think of the further insights about this idea that we might obtain from community science. We might identify further benefits of epistemic diversity, or we might discover particular conditions that promote or detract from the benefits of epistemic diversity. We could also learn more about the scope of the basic claim: in what sorts of contexts or groups should we expect to observe the diversity trumps ability phenomenon?
In some respects, and as Karen Kovaka points out, a scientist is someone who practices science, who engages in the activities of science research, and is part of a network or community of researchers. This intentionally open-textured definition would include the large-scale amateur projects devoted to biogeographical birdwatching as well as many other community science projects. In these, participants perform science but in a way different from those who perform science institutionally. Community science provides a mode of science with different cultural values, different objectives, and different epistemic objects from those within institutionalized science (Mahr and Dickel 2019).
We’ll set aside the behavioral ecology (but, read about our results: Walsh et al. 2020) and focus on the educational outcomes instead. Proponents of community science have theorized that being part of a community science project can produce a variety of good outcomes for participants: they may gain scientific knowledge, increase their understanding of the nature of science, become more invested in environmental conservation, or strengthen their trust in science (see Brossard, Lewenstein, & Bonney, 2005; Crall et al., 2013; Fortmann, 2008). The actual evidence supporting these suggestions is somewhat limited, partly because many community science projects do not build assessment into their structure. Projects also vary so much in terms of the structure and participants that identifying which features are or are not efficacious in producing these hoped-for educational outcomes is a complex task.
Welcome to the Brains Blog’s Symposium series on the Cognitive Science of Philosophy. The aim of the series is to examine the use of diverse methods to generate philosophical insight. Each symposium is comprised of two parts. In the target post, a practitioner describes their use of the method under discussion and explains why they find it philosophically fruitful. A commentator then responds to the target post and discusses the strengths and limitations of the method.

Fortmann, L. (Ed.). (2008). Participatory research in conservation and rural livelihoods: Doing science together. Oxford: Wiley-Blackwell.
These results support the idea that participation in community science can have educational benefits across different epistemic and psychological domains. And, compared to many community science projects, where participants are already highly knowledgeable about or invested in science, our project engaged adolescents with limited education about and exposure to science. Of course, establishing general claims about community science and educational outcomes requires far more data than a single project can provide. The point of the example is to illustrate the sorts of empirical claims community science projects can investigate, and how this investigation can happen in practice. The list of claims we might investigate using community science also extends far beyond this example. In addition to claims that community science affects participants’ attitudes toward or knowledge of science, we might assess claims about the following:
Hong, L., & Page, S. E. (2004). Groups of diverse problem solvers can outperform groups of high-ability problem solvers. Proceedings of the National Academy of Sciences, 101(46), 16385-16389.
Crall, A. W., Jordan, R., Holfelder, K., Newman, G. J., Graham, J., & Waller, D. M. (2013). The impacts of an invasive species citizen science training program on participant attitudes, behavior, and science literacy. Public Understanding of Science, 22(6), 745–764.
Douglas, H. (2005). Inserting the public into science. In Democratization of expertise? (pp. 153-169). Springer, Dordrecht.
Here is an example drawn from a project I helped design. In 2016, I was part of a team that developed a protocol for teaching high school students in the Galápagos Islands to observe sea lions on town beaches and record data about their behavior. Using this protocol, teenaged community scientists spent three field seasons comparing sea lion behavior on different beaches. They found that sea lions showed less aggression towards humans but more aggression toward one another on beaches that have more of a human presence and where sea lions are forced to crowd together.
Kendig, C. 2013. Integrating History and Philosophy of the Life Sciences in Practice to Enhance Science Education: Swammerdam’s Historia Insectorum Generalis and the case of the water flea. Science & Education 22(8): 1939-1961.
Kitcher, P. (2011). Science in a democratic society. Prometheus Books.
As the profile of community science continues to grow, the reasons for philosophers to engage with this method become more and more compelling. This is a model for doing science that is developing, changing, and gaining influence as a research method and as a way of organizing knowledge production. Not only can philosophers help to craft epistemic and ethical best practices for doing community science, and we can generate insights about core ideas in social epistemology at the same time.
* * * * * * * * * * * *
In this symposium, Karen Kovaka discusses community science and its place in social epistemology and philosophy of science, with Catherine Kendig providing commentary.