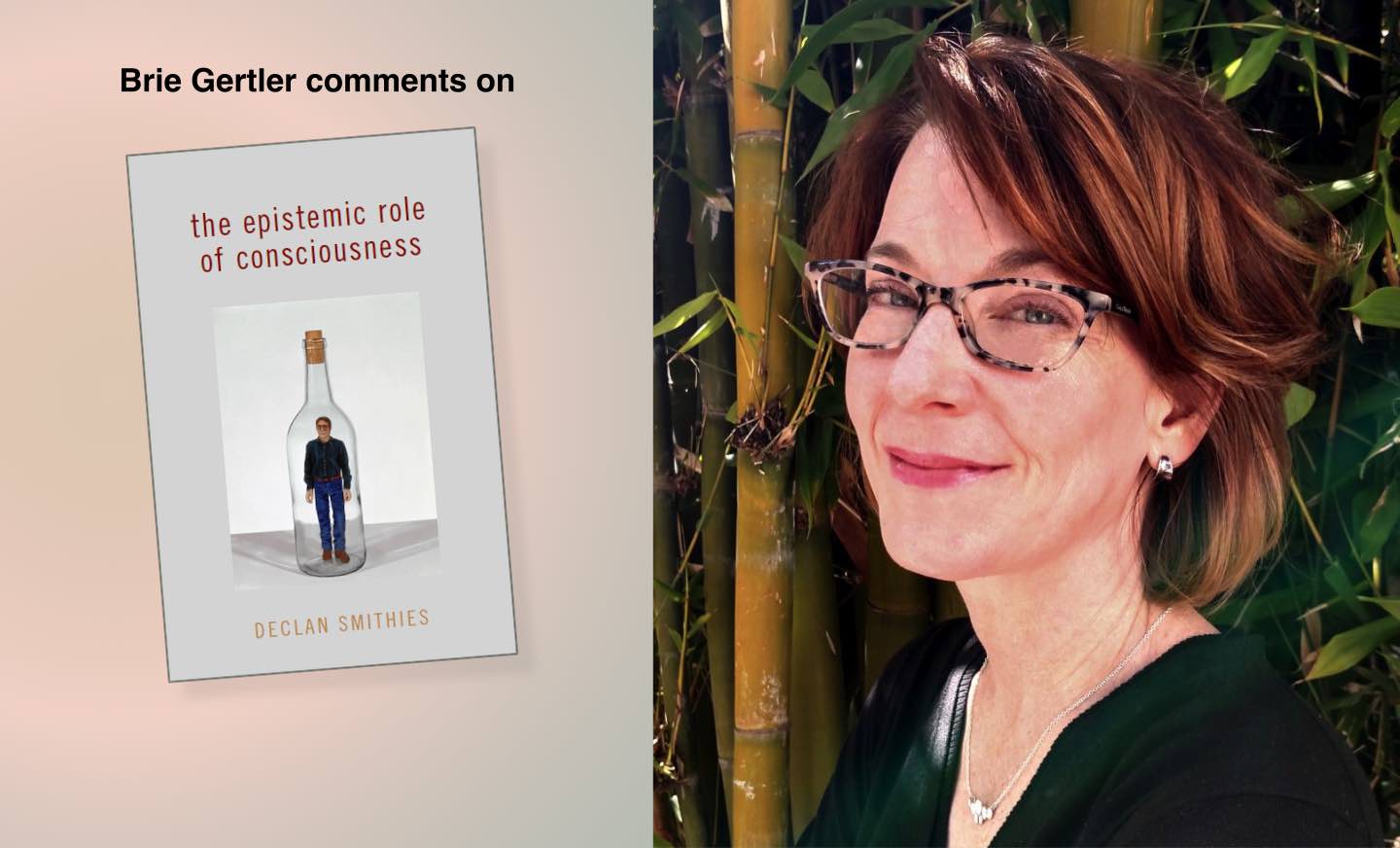 Rationality requires knowing what you believe, since otherwise you’re liable to fall into an irrational Moorean predicament (174).
Declan’s book offers a remarkably systematic picture of the nature of and relations among phenomenal consciousness, justification, belief, and self-awareness. In this short commentary I’ll raise some questions about a lesson Declan draws, for self-knowledge, from the phenomenon of Moore-paradoxical beliefs.
Brie Gertler (University of Virginia)
Self-Knowledge and Ideal Rationality
Declan’s nonstandard conception of belief also raises doubts about whether his account explains how we know (what we ordinarily think of as) our beliefs. On one standard conception (Schwitzgebel 2002), believing that p is a matter of dispositions not only to judge that p but also to act, reason, and affectively react as if p. Ideally rational thinkers may be disposed to judge that p in exactly those cases in which they are disposed to act, reason, and affectively react as if p. But for thinkers like us, dispositions to judge—e.g. that men and women are equally effective leaders or that whatever a man has in superabundance is owed, of natural right, to the poor for their sustenance—often diverge from dispositions to act, reason, and affectively react. Declan does not think that these latter dispositions constitute evidence, since (unlike the disposition to judge) they are not accessible in the sense relevant to internalism. So the move to this conception of belief prevents Declan’s account from explaining—relative to a more standard interpretation of “belief”—how we achieve knowledge of our own beliefs, or whether such self-knowledge is generally available.Therefore,
(iii) Rational thinkers know all of their beliefs.
Smithies, Declan (2016) “Belief and Self-Knowledge: Lessons from Moore’s Paradox”. Philosophical Issues 26: 393-421.
Silins, Nicholas (2012) “Judgment as a Guide to Belief”. In Introspection and Consciousness, Smithies and Stoljar, eds. Oxford University Press: 295-327.

Obviously, these comments reflect my own interests: in the extent and nature of self-knowledge in cognitively limited creatures like us. Declan’s interest may well lie in other epistemological questions.

Peacocke, Christopher (1998) Being Known. Oxford University Press.
(ii) The best explanation of (i) is that rational thinkers know all of their beliefs.
Suppose this argument is sound. It’s not clear what, if anything, it tells us about the situation of thinkers like us—the extent of our self-knowledge or how we achieve self-knowledge. Thinkers like us can be justified in false self-ascriptions because we sometimes (I would argue: always) know our beliefs only by inference from evidence, and evidence can be misleading. Now as the new evil demon problem illustrates, ideal rationality is no safeguard against misleading evidence. So if ideally rational beings are never mistaken about their own beliefs, as Declan maintains, then they are never in the epistemic situation that we sometimes (I would argue: always) find ourselves, viz., able to achieve self-knowledge only by inference from evidence.Omissive Moore-paradoxical beliefs (MPBs) are beliefs with the content p but I don’t believe that p. Declan takes it as a datum that MPBs are irrational and uses this fact to advance an ambitious conclusion about self-knowledge.As Declan notes, it certainly seems that MPBs can be rational. I may believe that p while my overall evidence—which may include evidence from sources like memory, or in the extreme case, evidence fabricated by an evil demon—makes it rational for me to believe that I don’t believe that p. Declan says that examples of this kind demonstrate only that MPBs can be non-ideally rational, that is, rational relative to standards that “take into consideration one’s human limitations” (Smithies 2016, 415). The above argument concerns ideal rationality: its conclusion is that ideally rational thinkers will know all of their beliefs.
In this fourth post, Brie Gertler discusses the conception of self-knowledge defended in Declan’s book. Here is the link to the recorded discussion, in which Declan responds to Brie’s comments.Let’s suppose that ideally rational thinkers’ beliefs will track their propositional justification. (It’s not clear to me that propositional justification does rationally suffice for belief; ideal rationality seems to me compatible with doxastic austerity.) The same cannot be said of human thinkers. An account of how we achieve self-knowledge must explain how it is that we can come to know our beliefs by exploiting this propositional justification—constituted by the disposition to judge that p—in a self-ascription. A natural thought is that we entertain the question whether p, thereby manifesting the disposition to judge that p, and then base the judgment I am disposed to judge that p on the judgment that p. But this is not Declan’s view. And although some (Peacocke 1998, Silins 2012) would question this, I think that, for broadly Humean reasons, self-ascribing a disposition on the basis of an occurrent judgment involves inference—and an inferential picture of self-knowledge runs counter to the spirit and ambitions of Declan’s view.

Welcome to the Brains Blog’s Book Symposium series on Declan Smithies’ The Epistemic Role of Consciousness. In this series, seven critics discuss the book with the author. The critics are Kengo Miyazono, Lu Teng, Takuya Niikawa & Yasushi Ogusa, Brie Gertler, Thomas Raleigh, and Tony Cheng. From April 26 to May 1, we will post each critic’s commentary and the recorded discussion one by one on the blog.(i) MPBs are always irrational.Schwitzgebel, Eric (2002) “A Phenomenal, Dispositional Account of Belief”. Nous 36: 249-75.In his account of how it is that ideally rational beings are able to know all of their beliefs, Declan uses an unorthodox conception of belief: “To believe that p is to be disposed to judge that p when you consider the question” (177). He argues that the disposition to judge that p—and not (only) its manifestation in a judgment—is evidence for the belief itself. So believing that p constitutes evidence that one believes that p. One who believes that p thereby has propositional justification for I believe that p.