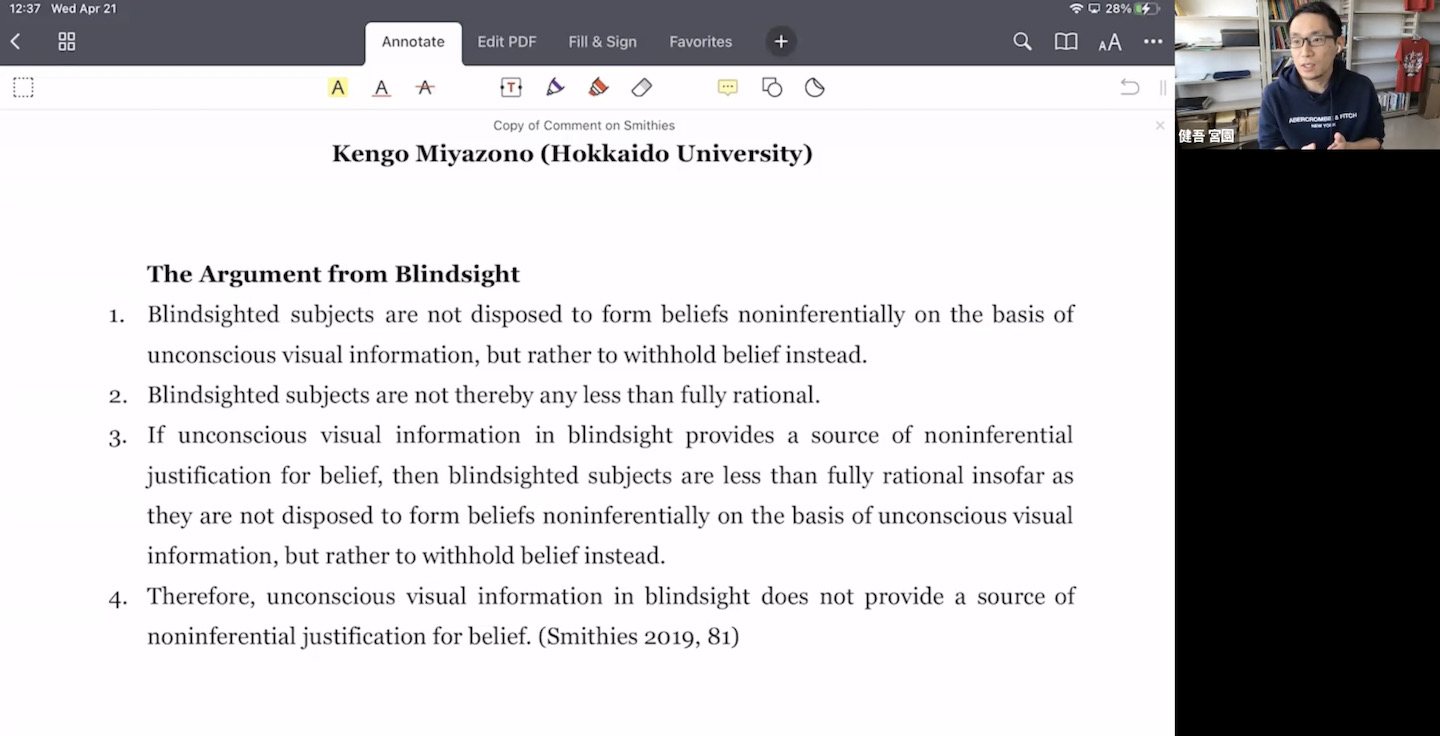 But the second stipulation about metacognitive beliefs can be problematic. It is far from obvious that the premise 1 and 2 are true not only in actual cases but also in the stipulated cases where blindsighters have no metacognitive beliefs about their own reliability. At least it is conceivable that the premise 1 is false about stipulated blindsighters with no metacognitive beliefs; they do form relevant beliefs about blind fields. The reason why the actual blindsighters do not form beliefs is because of their metacognitive beliefs. If blindsighters had had no metacognitive beliefs, they would have formed relevant beliefs (like super-blindsighters; Block 1995).
My focus is on Smithies’ argument in Chapter 3 of his book, which (following Berger 2020) I call the “Argument from Blindsight” or “AFB” for short. AFB plays a particularly crucial role in the Part I of Smithies’ book in which he defends a strong claim about the role of consciousness for epistemic justification (“Phenomenal Mentalism”) by considering particular cases (“the argument from below”).
My worry is that, in defending each premise of AFB, Smithies goes back and forth between empirical and stipulative discussions in a potentially problematic manner.
In contrast, Smithies’ other discussions are stipulative rather than empirical. Smithies stipulates that there is no conscious vision in blindsight cases. This is a crucial assumption for AFB; if this assumption is false, then the premise 3 does not even get off the ground. Smithies is aware of the empirical controversy on this assumption (Smithies 2019, 77 fn.2), but he simply stipulates that there is no conscious vision in blindsight cases.
Kengo Miyazono (Hokkaido University)
The first stipulation about conscious vision is relatively harmless. It would be reasonable to assume that the premise 1 & 2 are true not only in actual cases but also in the stipulated cases in which blindsighters have no conscious vision. Perhaps actual blindsighters have some degraded conscious vision (e.g. Philips 2020), but even they do not form relevant beliefs. Then the possible blindsighters with no conscious vision are not more inclined to form relevant beliefs than actual blindsighters with some degraded conscious vision. Thus, the premise 1 is very likely to be true about the stipulated cases.
For instance, the premise 1 is defended by the empirical observations about actual blindsighters such as DB (Weiskrantz 1997). The premise 2 is also defended empirically, in terms of the empirical observation that blindsight is a perceptual deficit rather than a cognitive deficit. (It is not obvious that the lack of cognitive deficit in X deficits implies the full rationality of X. But I set it aside for now.)
In this first post, Kengo Miyazono discusses the epistemological implications of blindsight. Here is the link to the recorded discussion, in which Declan responds to Kengo’s comments.
But, then, AFB seems to be committed to a potentially problematic equivocation; the premise 1 and 2 are empirical premises about actual cases of blindsight, while the premise 3 is about stipulated cases. Perhaps Smithies should do one of the following; either he focuses on actual cases of blindsight and shows that all premises are true about actual cases based on the basis of empirical observation, or he focuses on the stipulated cases and shows that all premises are true about the stipulated on the basis of intuitions. The former option seems to be difficult, which is why Smithies appeals to stipulation in order to get around controversies about actual cases in the first place. Then, the latter option is Smithies’ choice.