This task is appealing as a test of an inhibitory process. It requires initiation of a response on every trial, and so if it is successfully countermanded, this suggests that it has been suppressed (as opposed to never initiating the movement in the first place). Further, as there is not an alternative response to make, it is harder to argue that suppression comes indirectly from actively choosing another action. And, under certain assumptions that I don’t have the space to detail here, it provides a means of measuring the strength of the inhibitory process rather than only assessing its outcome in the slowing or omission of a response.
Inhibition as an account of self-control
Inhibition is arguably the function most colloquially associated with cognitive control. When we think of self-control or willpower, it is often our ability to stop ourselves from doing unwanted, distracting, or maladaptive tasks that we are thinking about. And it follows that the construct of inhibition has played a significant explanatory role in scientific ideas about the nature of cognitive control and its failures. When we perform a distracting task or have an unwanted thought or act in an inappropriate way, this could be because we failed to inhibit the impulsive action. Likewise, when we are slower to act because we are performing an uncommon action instead of a habitual one or because we are multitasking, this might be explained as a demand to inhibit the habit or the interfering task. We likewise hear accounts of the control deficits of patients or the development of control in childhood framed in terms of changes in the capacity for inhibitory control. Thus, inhibition is commonly viewed as the source of self-discipline and control, as that which withholds our hands from the temptation of life’s various cookie jars. 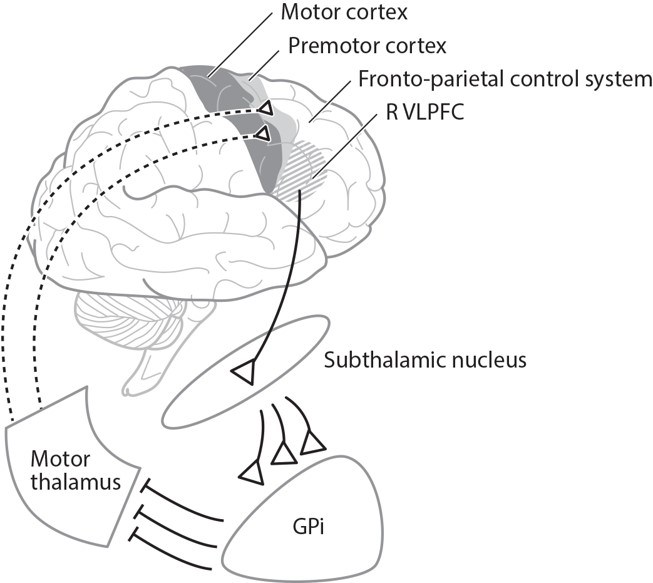 Yet, inhibition can be a pretender in cases like these. It is a description of an outcome of our behavior, such as when we do not produce a particular action or when the pace or vigor of a response is slowed. However, these outcomes in our behavior need not arise from an underlying inhibitory process. For example, we can avoid producing one behavior by choosing another one. Indeed, we can simply choose not to perform an action in the first place. One behavior can likewise be slowed by interference or blocking, if we choose another. These examples seem distinct from our intuition of what an inhibitory process should do. An inhibitory process should countermand an initiated action or thought, thereby suppressing or preventing its realization. Thus, merely observing that an unwanted action did not occur does not tell us that this reflects the actions of an inhibitory control mechanism in the above sense. Indeed, the scope of an inhibitory process that satisfies the above definition appears more limited.
One case where the evidence for an inhibitory process is quite convincing is that of rapidly stopping a movement. And so, it is worth introducing this example, which is treated in more detail in my book, On Task. In laboratory studies, motor stopping can be studied using tasks like the stop-signal task in which a movement is initiated to a “go” cue and then is occasionally countermanded in response to a second “stop” cue that occurs at some offset after the go cue.
Where thought is concerned, the evidence is more limited for suppressive inhibition versus the alternatives. Nonetheless, one place where there is growing evidence for stopping of cognition is in the fast stopping of memory retrieval, such as is tested using the think/no-think procedure. This procedure cues when to stop retrieving a memory associated with a cue. People can stop retrieval in this way, and when they do, similar cortical networks and neural dynamics are observed in the brain as seen in fast motor stopping. So, it seems likely that we do have some ability to broadly stop thought, perhaps with similar mechanisms as motor stopping.
Motor Stopping
Today’s discussion should make clear why it is perilous to take any instance of error, impulsive act, or intemperance of the moment and attribute it to a failure of inhibition. Indeed, the same disinhibited behavior could arise from multiple distinct underlying mechanisms. Thus, it is no surprise that when people have tried to correlate one measure of inhibition, such as stopping, with real world impulsive behaviors, the results have been mostly weak. This does not mean that we should not take these mechanisms seriously. Rather, it warns against theorizing that relies on one general mechanism of inhibitory control as an account of our complex and multi-faceted ability to control ourselves.
The stop-signal paradigm has led to a wealth of information about this fast inhibitory process for movement. We have learned that it is not only fast but also global. It suppresses motor responding even for effectors that were not part of the countermanded response. We have learned that cortical-basal ganglia networks are important for this kind of fast stopping. But, they bypass the slower selective gating deliberations in the striatum and instead act through a structure called the subthalamic nucleus that causes broad inhibition of thalamo-cortical drive (Figure 1).
Thus, fast, global inhibitory mechanisms for movements, and possibly thought, complement the slower selective gating mechanisms we discussed earlier. The cortico-striatal mechanisms can select or prohibit specific actions, goals, and contexts by gating working memory. They are content addressable, but also fairly slow. By contrast, the inhibitory stopping circuit is fast and global, sacrificing content addressability in favor of efficiently stopping unwanted actions. Thus, in the complexity of our everyday behavior, these systems likely interact to balance the need for speed versus specificity in control.