“Seeing himself gradually consumed by the anxiety of not having a son, the king mounted his horse and just left for the dense forest alone. Not even the priests and brahmins of the palace knew where he had gone. In that forest, filled with deer and birds and other animals, King Suketuman wandered aimlessly. He observed the different kinds of trees and shrubs, such as the fig, bel, date palm, jackfruit, bakula, saptaparna, tinduka, and tilaka, as well as the shala, tala, tamala, sarala, hingota, arjuna, labhera, baheda, sallaki, karonda, patala, khaira, shaka and palasha trees. They were all beautifully decorated with fruits and flowers.
“There was once a kingdom named Bhadravati, which was ruled by King Suketuman. His queen was the famous Shaibya. For a long time, they had no son and were anxious about who would succeed the king to the throne. Constantly in worry, King Suketuman found no happiness anywhere in his kingdom. The royal couple’s angst was especially intense when they offered oblations of water to the forefathers (tarpana) for they painfully realized they would have no descendants who would offer them tarpana and so at death they would become ghosts. They felt the water undrinkable as boiling water. It upset the king and queen even more that there would be no one left in the dynasty to offer tarpana to the forefathers.
The glories of Pausha-Shukla Ekadashi or Putrada Ekadashi can be found in the Bhavishya Purana of Veda Vyasadeva in a conversation between Maharaja Yudhishthira and Lord Krishna.
“O King, now I shall narrate to you the history of the purifying Putrada Ekadashi which awards even fame and learning.
“On the advice of the Vishvadevas, the king observed the auspicious Putrada Ekadashi on that day in accordance with the established rules and regulations. On the following day, Dvasdasi, after breaking his fast, he paid repeated obeisances to all the sages.
“The sudden howling of a jackal broke his reverie. It was midday, and the king was tired. Tormented by hunger and thirst, he wondered, ‘What sinful deeds are making me suffer so? My throat is parched and burning, and my stomach empty and rumbling. Have I not pleased the demigods (devas) with numerous fire sacrifices and abundant worship? Did I not offer gifts and delectable sweets in charity to worthy brahmanas? Have I not cared for my subjects as my own children? Why then am I suffering? What unknown sins have come to fruition and plaguing me so dreadfully?’ 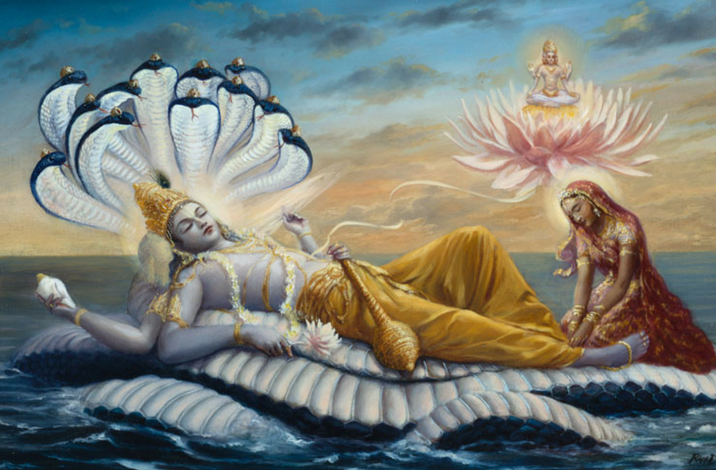 “Absorbed in these thoughts, King Suketuman strove on, and eventually, by pious credits, came upon a beautiful lotus pond that resembled the famous Manasarovar Lake. It was filled with aquatics, including crocodiles and many varieties of fish, and graced with varieties of
“‘The very meaning of Putrada,’ the sages replied, ‘is “bestower of a putra or son.” Observe a complete fast on this Ekadashi. By our blessing and by the mercy of Lord Sri Keshava you will surely obtain a son.’
“Anyone who even reads or hears the glories of Putrada Ekadashi will obtain the merit earned by performing a horse sacrifice. I have thus narrated the glories of Putrada Ekadashi for the benefit of all humanity.”
Lord Sri Krishna replied, “O saintly king, for the benefit of humanity I shall now relate the way of observing the fast on Pausha-Shukla Ekadashi.
“In conclusion, O Yudhisthira, one desiring to fulfill his desires should strictly observe Putrada Ekadashi. One who strictly observes this Ekadashi on this planet will surely obtain a son, and after death, he will achieve liberation.
“Among all animate and inanimate beings in the three worlds (lower, middle and upper planetary systems), there is no higher personality than Lord Narayana.”
Ministers, friends, and loved ones could bring them no cheer. The elephants, horses, and infantry gave the king little solace. He eventually became practically inert in helplessness. The king contemplated, ‘It is said that without a son, a marriage is futile. The heart and hearth of family man without a son are ever vacant and miserable. Bereft of a son, a man cannot repay debts he owes his forefathers, demigods (devas) and other human beings. Therefore every married man must beget a son. Then he would be famous within this world and eventually attain the auspicious celestial realms. Having a son is an evidence of pious activities performed in a hundred past lives. It bestows a long life span as well as health and wealth. Sons and grandsons indicate one has worshiped Lord Vishnu, the Supreme Personality of Godhead, in the past. The great blessing of sons, wealth, and sharp intelligence can be achieved only by worshiping the Supreme Lord, Sri Krishna.’ Thinking thus, the king became even more agitated. Worried day and night, even his dreams were filled with great anxiety. The king eventually became so disturbed that he decided to end his misery by committing suicide. But then he knew that suicide leads to hellish rebirth, and so he abandoned the idea.
“He dismounted his horse and offered his obeisance to the sages, who sat on the shore of the pond, chanting the holy names of the Lord on Japa beads. Joining his palms in humble supplication, he offered them glorification.
“Everyone should observe the rules and regulations of Ekadashi Vrata, to their utmost ability. This applies to Putrada Ekadashi as well. This auspicious day destroys sins and elevates one to the spiritual abode. The Supreme Personality of Godhead Sri Narayana, the original personality, is the worshipable Deity of this Ekadashi. He gladly fulfills all desires of His faithful devotees and awards them life’s perfection.
This year Putrada Ekadashi falls on 24 Jan 2020.
“The king was elated. He exclaimed, ‘I have tried long for a son. If you great sages are pleased, kindly grant me the boon of having a good son (putra).’
“He saw deer, tigers, wild boars, lions, monkeys, snakes, huge bull and cow elephants with their calves. He saw four-tusked elephants with their mates close by. There were cows, jackals, rabbits, leopards, and hippopotamuses. Beholding all these animals accompanied by their mates and offspring, the king remembered his own menagerie, especially his palace and became so sad that he absent-mindedly wandered amidst the forest animals.
lilies and lotuses opened to the Sun. Swans, cranes, and ducks swam happily in its waters. Nearby were many attractive ashramas, where resided many saints and sages who had the power to fulfil anyone’s desires. They were well-wishers for all. When the king beheld the scene, his right arm and right eye began to twitch. Considered a good omen for men, the quivering made the king anticipate auspiciousness.
“Appreciating the king’s respectful attitude, the sages said, ‘We are very pleased with you, O king. Why have you come here? Please let us know what you desire.’ The king replied, ‘O great sages, may I know who you are? May I know your names? I can see that you are auspicious saints. Could you please tell me why you have come to this beautiful place?’ The sages replied, ‘O king, we are known as the ten Vishvadevas (the sons of Vishva namely Vasu, Satya, Kratu, Daksha, Kala, Kama, Dhriti, Pururava, Madrava and Kuru). We have come to this beautiful pond to bathe. The month of Magha will be here in five days, and today is the famous Putrada Ekadashi. One who desires a son should strictly observe this particular Ekadashi.’
Yudhisthira Maharaj said, “O Lord, Please mercifully describe the Ekadashi that occurs in the bright fortnight (Shukla paksha) of Pausha Masa (December/January). Which is the Deity to be worshiped on this sacred day? O Purushottama, O Hrishikesha, please tell how one may please You on this day?”
“Soon after, Suketuman returned to his palace and united with his queen. Queen Shaibya became pregnant, and exactly as the Vishvadevas had predicted, a bright-faced, beautiful son was born to them. In due course, he became famous as a heroic prince, and the king gladly made his noble son his successor. The new king assumed the reigns of the kingdom conscientious to care for the subjects as his own children.
Click here to know – “How to observe ekadasi as per Srila Prabhupada’s instructions?”