Little Bruno was encouraged to work in the vineyards. “I was always terrible,” he recalled of his work in the fields. “So I shifted to philosophy.”
His most incendiary and compelling book was entitled Où Atterrir?, published in English translation as Down to Earth, in 2018. In it Latour asks us to imagine the captain of a plane telling their passengers: “Ladies and gentlemen, we are in a holding pattern … There is nowhere to land right now. No available runway; no safe harbour.” This was an allegory – crises of migration, inequality and environment are linked by a politics of denial: we finally have an environmentally based politics, but it’s one of negation – hence Brexit, Trump’s wall, Matteo Salvini’s refusal of Mediterranean refugees in Italy, the UK’s policy of shipping refugees to Rwanda. 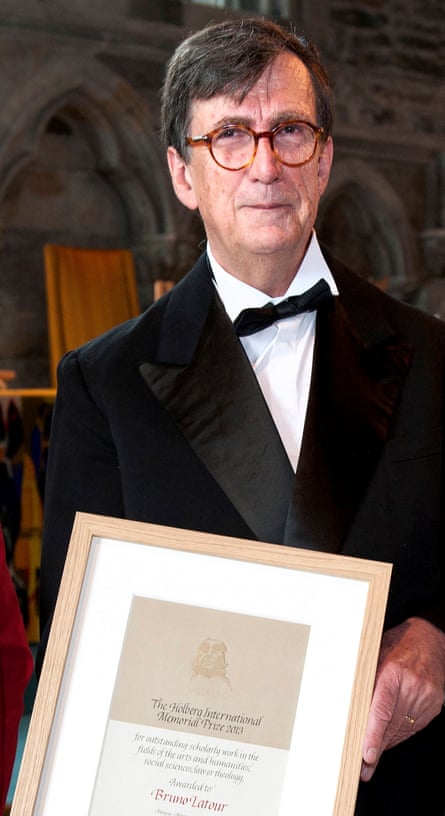 Termites should be our role models, Latour argued, because they do not lay waste to the Earth, nor are any of them insect Elon Musks who seek to relocate to another planet. “That is escapist,” Latour said. “But when you think in terms of a critical zone, you are locked in, you cannot escape.” By that key term, “critical zone”, he meant a space between two and three kilometres thick “above and below the surface of the Earth. But all discovered life is within it.”
With the rise of alternative facts, he argued, whether or not a statement is believed depends far less on its veracity than on the conditions of its “construction” – that is, who is making it, to whom it’s being addressed and from which institutions it emerges and is made visible. Latour did not produce our post-truth age, but foresaw how it could arise.
He is survived by his wife and children.
Latour denied he was a relativist, but rather that he was drawing attention to how day-to-day lab research worked. It was hardly a progression towards unveiling facts or truth but a disorderly mass of observations, inconclusive results and fledgling theories that were systematically erased when research results were presented as facts. What Sokal failed to grasp, Latour argued, is that “facts remain robust only when they are supported by a common culture, by institutions that can be trusted, by a more or less decent public life, by more or less reliable media”.